Podcast brought to you by:

Amid potato fields, vineyards and rows of sweet corn, farmers on the North Fork are turning their attention to hemp, a crop that’s fueling a multibillion dollar industry and rapidly becoming an integral part of the nation’s agricultural landscape.

The passage of the 2018 Farm Bill in December removed hemp from being classified as a Schedule 1 drug — the same category as heroin­ — and legalized hemp production in all 50 states. The plant has been legally cultivated in New York since 2015, when the state Legislature approved a pilot program administered by the New York State Department of Agriculture & Markets.

About a dozen farmers in Suffolk County, including several on the North Fork, are authorized under New York State’s program, according to the Department of Ag & Markets.

In June, partners Leslie Hoffman, Victor VanBorkulo and Brian Klug planted four acres of hemp that will eventually be used for CBD products at North Forty Flower Farm in Northampton.

Ms. Hoffman, who spent her career in the sustainable building industry, has been a longtime advocate of drug policy reform and owns a licensed 23-acre hemp farm near Asheville, N.C.

Earlier this month, she co-hosted a workshop at North Forty that brought together farmers, investors and product-makers to get up close and personal with the once-forbidden plant.

The event was meant to be a hands-on look at the industry for interested participants, covering everything from the history and uses of the plant to what it needs to thrive on a farm.

Standing in between neatly planted rows of hemp, Ms. Hoffman described how the East End’s growing conditions are well-suited for the plant. She joked that it “grows like a weed,” but is susceptible to powdery mildew and mold. “So spacing and air flow are important,” she explained.

It’s more than just a cash crop to Ms. Hoffman, who acknowledges the “maligned” history of the cannabis plant.

“So many people have had their lives destroyed because of this plant being illegal,” she said. “And really, she’s a harmless player.”

Although similar in appearance to marijuana, hemp has low levels of tetrahydrocannabinol, or THC, and produces no psychoactive effects. It is, however, high in cannabidiol, or CBD, a molecule touted for its benefits in treating pain, inflammation and anxiety.

About four acres of hemp has been planted at North Forty Flower Farm in Northampton. (Credit: Tara Smith)

From skin care products and tinctures to lattes and seltzer, products infused with CBD are part of a booming industry that the New-York based investment bank Cowen & Co. has forecast will grow to $16 billion by 2025.

To date, the Food and Drug Administration has approved only one medical use of CBD — a prescription drug to treat a rare but severe form of epilepsy — and has not ruled that it is safe as a food additive.

But hemp has a multitude of other uses, including textiles, paper, bioplastics and building materials.

“This makes a big difference for farmers,” said Rob Carpenter, administrative director for the Long Island Farm Bureau. “[Hemp] is another alternative for farmers that will allow them to stay in business and capitalize on new trends.”

Now that hemp is recognized as an agricultural product overseen by the United States Department of Agriculture rather than the Drug Enforcement Administration, some concerns are mounting over the possible future cultivation of marijuana.

Currently, regulations are in place to prevent farmers from illicitly growing marijuana at licensed hemp farms. The crops are tested regularly; if more than 0.3 percent of THC is detected, the plant must be destroyed.

Two Riverhead companies are currently licensed to grow hemp in Riverhead Town: one is registered to Plant Connection and Jamesport Farm Brewery co-owner Anthony Caggiano and the other, East End Agriculture in Aquebogue, is registered to 22-year-old Tristan Seuling. Neither Mr. Caggiano nor Mr. Seuling could be reached for comment on their plans.

In Southold Town, a license has been issued to East End Flower Farm in Mattituck, a company registered to Craft Master Hops co-owner Marcos Ribeiro.

“It’s a new and exciting crop. The market demand is strong and price point is fair, for now,” Mr. Ribeiro said Tuesday.

He said the farming process is labor intensive — ”think tomatoes” — but that he wanted to get involved and see where it takes him.

When asked if he would consider growing marijuana in the future, he said, “Once it becomes legal, I will definitely give that a go.”

Southold Town Supervisor Scott Russell said he has no position on hemp being grown as an agricultural product, but is concerned about marijuana being next.

“I do not believe [marijuana] should be declared a bona fide agricultural product. It isn’t and it shouldn’t,” Mr. Russell said Friday.

Southold Town Councilman Bill Ruland, the town’s liaison to the agricultural advisory committee, said the committee supports “anything that will keep a grower growing.”

But hemp’s relation to marijuana, he said, must be an essential part of the conversation. “As a cash crop, [hemp] deserves a hard look because it has the ability to offer a good return to the producer,” Mr. Ruland said.

In a letter to the Suffolk Times last month, real estate magnate Stefan Soloviev addressed speculation on his plans for more than 300 acres of land he acquired on the North Fork in 2017, denying that he has any large-scale development plans and saying instead that his focus will be on hemp production at some of the properties.

“As long as profits meet expectations I won’t develop,” he wrote. “As long as we can grow hemp successfully on Long Island, there will be no construction plans.”

According to state records, Mr. Soloviev is licensed to grow and process hemp, which he said in an email he has also grown in Colorado. He declined to be interviewed for this story.

At North Forty Flower Farm, Ms. Hoffman is preparing to host a second workshop this Saturday, Aug. 17, that will again explore how hemp is cultivated and will focus on the financial investment needed and hemp’s burgeoning potential.

Steve Trenk, founder of Lizada Capital, a legal cannabis investment firm, is also slated to speak. The workshop costs $250 and anyone interested in attending is asked to email [email protected].

Meanwhile, the plants are nearing four feet tall as a tentative September harvest nears. Ms. Hoffman is already looking toward the future.

“If this goes well, we could plant more,” she said, describing the industry as “nascent.”

“New York State wants this to be good for farmers and for the state itself,” she said. “We know there’s an incredible, pent-up interest in this plant.”

Next Marijuana vs. hemp: What’s the difference? - Allentown Morning Call 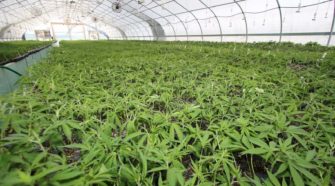