Tania Klein-Breteler gained her first exposure to hemp products two years ago when her dog, Scrappy, was dealing with anxiety.

“He was like a zombie… I couldn’t calm him down,” she said.

None of the solutions offered by the veterinarian worked, so Klein-Breteler began putting CBD oil — or cannabidiol, a chemical compound in both hemp and marijuana plants — in Scrappy’s treats, which has effectively fixed the problem ever since.

After seeing CBD products work for her dog, as well as herself and her parents, Klein-Breteler decided to start her own hemp business. Just a few days before the calendar switched to 2020, she opened Hemp Wellness Boutique in Danville on Trade Street to provide all types of hemp products, including CBD oils, bath and body products, foods, coffees and teas, and even dog collars made out of the hemp plant.

Industrial hemp has thousands of uses, ranging from health and medicine to industrial. While hemp — and CBD in particular — has been attributed with a wide range of health benefits that include helping curb anxiety, alleviating pain, stopping seizures and aiding in weaning someone off of an addiction, these claims are backed by anecdotal more than scientific evidence.

“I am not a doctor. I cannot say buy that and you’ll feel better,” Klein-Breteler said. “All I can say is that it is known to help people.”

Bryce Luffman, 78, recently had his own positive experience with CBD oil, which led him to join Klein-Breteler and work part time at the new store.

A guitar player who had played professionally at different points throughout his life, Luffman’s arthritis began acting up, causing serious pain in his left hand every time he tried to play. His doctor told him he would simply have to live with it.

On a friend’s recommendation, Luffman decided to try a CBD oil solution, and within a month he was able to play the guitar again with no pain.

As hemp and CBD products have flooded the market, the Food and Drug Administration has not implemented regulations which has resulted in products that vary wildly in quality.

Since Klein-Breteler opened, many potential vendors have reached out, hoping to sell their products in her store. Additionally, many area growers who grew hemp without a contract with a processor have come in asking for her to purchase their raw product. After Congress legalized the commercial production of industrial hemp with the Hemp Farming Act of 2018, 2019 was the first year Dan River Region farmers could attempt to grow the product.

While this growing season was a learning experience that was neither an inherent success or failure for Pittsylvania County hemp growers, many have yet to sell off their raw product, said Stephen Barts, Pittsylvania County extension agent. Processors only have a certain capacity, which means many growers will simply have to store the raw product for a while longer.

“This is not unusual from an agricultural product standpoint,” he said, mentioning that the same thing often happens with commodities like corn and soybeans.

Even though chemical tests are required, there is no standard for the cutting, drying or grinding of the sample, which means different labs can end up providing drastically different results. For those growing hemp, accurate tests are essential. Regulations limit the amount of tetrahydrocannabinol — or THC, which is the part of marijuana that makes someone high — to 0.3% while the profit margins hinge on the concentration of CBD.

“That is a critical thing that needs to be addressed so everybody is playing by the same set of rules,” said Mark Gignac, executive director of the Institute of Advanced Learning and Research, which has a hemp testing lab that worked with 120 area growers last year.

For all of the products in her store, Klein-Breteler either has hard copies of lab test results or the items have app-based QR codes customers can scan and verify for themselves.

Because the FDA hasn’t made any action regarding CBD and hemp products, most lenders and financial institutions are hesitant to work with businesses that specialize in hemp. Even though she previously owned a furniture store in South Carolina for 20 years, it took Klein-Breteler three months to find a bank that was willing to work with her, simply because of the hemp.

The Secure And Fair Enforcement Banking Act of 2019, which was referred to Congress’ Committee on Banking, Housing and Urban Affairs in September, would essentially prevent federal regulators from penalizing any bank or lending institution for providing banking services to any legitimate marijuana-related business, which would include those producing and selling hemp products.

For now, Klein-Breteler’s financial providers charge her higher fees and inspect her store regularly as a stipulation. The company would also be at risk of losing its financial backing if she were to offer any smokeable CBD merchandise — something that many area vape stores offer.

While business has been relatively slow so far, Klein-Breteler expects it to pick up. Her goal is to eliminate the stigma of CBD.

“I think I’m at the beginning stages… it’s only a matter of time for this thing to explode,” she said.

ll of the CBD products in Hemp Wellness Boutique in Danville either have corresponding hard copies of lab tests or have scannable QR codes that customers can check for themselves. Lab testing – which is important to ensure that products stay below the threshold of THC and actually contains the advertised amount of CBD – has not yet been standardized.

Tania Klein-Breteler uses CBD products to alleviate anxiety in her dog, Scrappy, and help both herself and her parents with pain, which led her to want to start a business selling the products.

Because the FDA has not yet approved CBD and all types of vendors are offering untested, inaccurately labeled CBD products, it was very difficult for Tania Klein-Breteler to obtain financing for her business, Hemp Wellness Boutique. 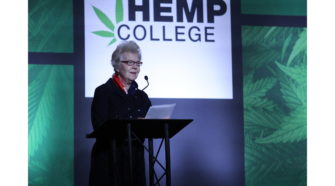