Commercial processing of WA-grown hemp seed has begun in the south-west this week, providing a major shot in the arm for the fledgling industry.

Until now, WA’s hemp growers have been processing seed manually in small volumes in their own kitchen, or paying hefty freight charges to send their crops to processors in the Eastern States.

Mr Thomas, a WA Hemp Growers Co-operative member, said the new equipment would be available to other growers on a contract basis, which should drive further growth in the industry.

“Until now there has been the challenge that there is no local processing capability,” he said.

The operation includes sorting and de-hulling the seed to create nutritious hemp hearts, which are rich in essential nutrients such as fibre, protein and omega 3.

Mr Thomas, pictured, said Hemp Processors WA would next year source further equipment to treat the hemp stalks that are rich in fibre and cellulose. Called decortication, this separates the inner core called hurd — suitable for paper and plastic — and the external fibre.

The hemp industry received a major boost in late 2017 when changes to the Food Standards Australia New Zealand Code permitted the sale of food products derived from hemp seed with a THC content of up to one per cent.

Since then, WA hemp growing licences have doubled. There were more than 70 commercial crops and seven hemp research plot trials this season, using 22 hemp varieties.

Job No. 1: ‘Educate and promote green alternatives based on hemp’ – HempToday 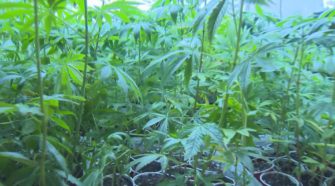