Idaho is arguably the least hemp-friendly state in the U.S., and it sits right in the middle between major hemp-producing states like Oregon and major cannabinoid extracting states like Colorado since both Interstate 84 and Interstate 90 pass through Idaho.

Since it’s not economical to ship hemp biomass by plane and no industry player has matured to the scale which requires shipment by rail, Idaho is a major problem if you’re looking to ship raw materials from the Northwest.

For those who think the 2018 Farm Bill covered this, just look at what happened to Denis Palamarchuck, a truck driver who thought the same thing.

Back in February, the Idaho State Police said that it seized nearly 7,000 pounds of illegal marijuana from a truck passing through the state.

On one side of the shipment, the Colorado-based company that bought the plants in Oregon says it’s 100% legal industrial hemp. Meanwhile, the truck driver that was caught transporting the hemp spent four days in jail, was charged with felony trafficking of marijuana, and was only released after posting a $100,000 bond.

The Idaho State Police went as far as to write that, “the trooper’s training and experience made him suspicious that the cargo was in fact marijuana, not industrial hemp,” and that a drug-sniffing dog also “demonstrated a positive alert on the cargo.”

It should be noted that the driver wasn’t hiding anything. He was stopped while pulling into the East Boise Point of Entry weigh station for a check as any truck is supposed to. Beyond that, the truck’s bill of lading classified the cargo as hemp.

And, even though the test results came back positive for THC, the tests performed by the Idaho State Police can’t test for the concentration which would determine whether or not the biomass being shipped was hemp or not under federal law.

Hemp vs. Marijuana Under the 2018 Farm Bill

Following the Agriculture Improvement Act of 2018, a.k.a. the 2018 Farm Bill, marijuana and hemp were defined as being two different strains of the Cannabis sativaLplant and the difference between the two is decided by THC content.

Although the Controlled Substances Act historically made no distinction between marijuana and hemp, the 2018 Farm Bill defined hemp as any part of the Cannabis sativa L plant, including all derivatives and extracts such as CBD, provided that the plant contains less than 0.3% THC.

Any Cannabis sativa Lplant or derivative from such a plant with a higher THC level is considered marijuana, which remains aSchedule I substance in the United States.

For a state with a $27 billion dollar agricultural industry, Idaho sure doesn’t act like one sometimes.

Idaho’s original Hemp Research and Development Act, which was co-sponsored by Representatives Dorothy Moon and Caroline Troy would have removed industrial hemp from the state’s Schedule 1 substance list and created a regulatory framework to foster its cultivation, transportation, and sale.

Unfortunately, due to law enforcement groups’ concerns and major amendments and pushback from the state Senate, most of the original House sponsors dropped their support. Regarding the new House Bill 122, Rep. Moon noted that “the bill no longer conforms to the 2018 Farm Bill,” and rather, “makes hemp illegal to grow, possess and transport in Idaho.”

The Idaho House also verbally rejected a resolution which would’ve declared it the state’s policy to allow for industrial hemp cultivation under federal Department of Agriculture rules, beginning in the 2020 harvest season. At least that would allow one path forward for Idaho farmers looking to increase their profit-per-acre.

While hopeful in-state industry participants left to wait, Idaho legislators are working to progress a bill that would’ve prevented the seizure of that hemp shipment mentioned above.

On Monday, the Senate State Affairs Committee approved legislation involving hemp transportation through Idaho, sending it on to the full Senate.

Although it passed the House last week, Rep. Troy presented the bill to the Senate State Affairs Committee with alterations including the addition of certain language to include Canada, given the approximate 45-mile border shared between Idaho and British Columbia.

To prevent debacles like the one with Denis Palamarchuck, the amended legislation also includes funding so that the Idaho State Department of Agriculture can coordinate their enforcement efforts with the Idaho State Police and more.

It is worth noting that legislation like this will open the doors for multi-state hemp conglomerates to transport hemp through Idaho, while the farmers in the state are kept out of the hemp industry until further notice.

In the Palarmarchuk case, he’ll be arraigned in 4th District Court before District Court Judge Jonathan Medema on Tuesday, April 16th. Regarding the other hemp-related initiatives in Idaho, we’ll be standing by to see what happens. In the meantime, be sure to subscribe to updates here so you never miss an important development. 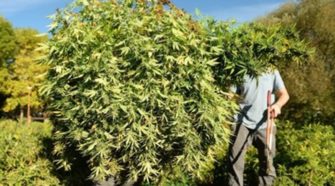