OMAHA, Neb. (KMTV) — County attorneys our on their own on how to prosecute pot tickets, because hemp and marijuana look virtually identical.

“Our office has not charged any citation since May 30th,” says Lancaster County Attorney Pat Condon.

In Lancaster County, every person cited for possessing less than an ounce of weed, hasn’t been charged since hemp became legal.

That includes four Husker football players who got marijuana tickets in the summer.

The reason they got off? There’s no way to test the plant in state for THC, which if the plant has more than 0.3 percent of it, it’s pot.

The only way to test is sending it out of state, which costs counties more money than the ticket is worth.

But in Sarpy County, things are a little bit different. It’s business as usual for prosecutors going after marijuana citations although they are taking things on a case by case basis.

“It’s not unusual that a lot of these situations in which they’re stopped they actually say it’s marijuana, we may also be able to prosecute based on case law regarding just the facts and circumstances, you know they’re probably not running around with small amounts of hemp claiming they’re smoking,” says Scott Earl, with the Sarpy County Attorney’s Office.

Like Sarpy, Douglas County is also going ahead with marijuana charges, with nobody challenging the THC content in court, yet.

But all prosecutors agree, they want to get on the same page.

“We’re all looking for a solution to this problem,” says Condon.

That solution could be coming soon.

Douglas County Attorney Don Kleine says he thinks within a few weeks ,UNMC will have a lab set up to test for THC.

Next EXCLUSIVE: Omaha division of the Drug Enforcement Administration says it is not prosecuting CBD, hemp sellers or dealers - KETV Omaha 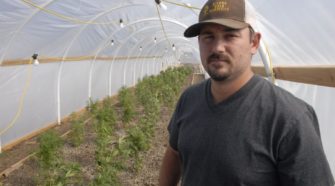