BELDING, Mich. (WOOD) — While marijuana, both medical and
recreational, has been getting all the attention, pot’s brother, hemp, is the state’s newest cash crop.

Harvest is underway as hemp is legal at both the state and federal level this year.

At first glance, The Hemp
Train LLC, a hemp farm in Belding, looks like a stoner’s dream.

“Ultimately, nobody’s going to get high when the percentage is 0.4% THC,” Daniel Bailo, co-owner of The Hemp Train, said.

He and Bradly Nicholls are partners at the hemp farm. They started planning their business after meeting about a year and a half ago in cannabis-friendly Oregon. There, they leased land, bought seeds and hired about 15 to 30 workers.

“A lot of it has been sort of jumping out of an airplane and
building a parachute on the way down,” Bailo said.

They are growing four acres of hemp, which can be used for different types of CBD products for people and pets to use.

“We’re kind of front-runners — leaders in (the) industry — first to
market in a way,” Bailo said.

The hemp industry estimates about $10,000 to $12,000 per acre, but if the plants are trimmed up with the buds separated, it can be two or three time that price. That compares with corn farmers, who are lucky to get $500 for an acre of their product.

“There’s people putting it into everything. You can get it at
almost every local gas station,” Bailo said.

“Ben and Jerry’s Ice Cream is talking about it. Nabisco is talking
about putting it in products, but we’re going through some hurdles right now
with the FDA,” Nicholls said.

Nicholls and Bailo are high on the possibilities of their young
business.

“It is interesting, the average age in the U.S. for farmers is 60 years
old and the average first-time farmer in the U.S. is 46 years old, so to be
coming in this at 33 as a farmer puts us way below the average,” Bailo said.

They are among 564 hemp farmers licensed to grow hemp this season
under a pilot program by the Michigan Department of Agriculture. There are also 423 processors and handlers holding state licenses to help bring the inaugural crop to the market.

“I think you’re going to see a lot of young people who are
interested in it because a lot of the things the cannabis plant provides really
can help change the world,” Bailo said.

Hemp farmers are waiting for the U.S. Department of Agriculture
rules expected this year that would put hemp in the same status as other agricultural commodities.

This would qualify hemp farms for loans and insurance and put them under
the Right to Farm Act, meaning states and municipalities would be limited in excluding hemp farms. 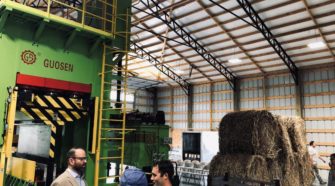