WASHINGTON – The 2018 Farm Bill legalized industrial hemp and gave Native American tribes, as sovereign entities, the same rights as states to control and regulate its production.  This month, tribal farmers across the nation will harvest their first legitimate crop, hoping to cash in on a global market worth billions of dollars. But whether their product will make it to market this year is still up in the air.

After fighting for two decades for the right to grow hemp, it was a joyful occasion, marked by prayer and song. But as the summer draws to a close, White Plume has grown increasingly anxious.

“I’m three weeks away from harvest,” he said. “Right now, it’s just tense. And sometimes it’s overbearing, cause you don’t know whether you are going to be able to sell or not.”

In 1970, the federal government banned the growing of industrial hemp, once a legal crop in the U.S. The Controlled Substances Act made no distinction between hemp, an agricultural product, and marijuana, a drug.

Both hemp and marijuana are varieties of the cannabis plant.  While they may look and smell alike, they differ chemically.  Marijuana (Cannabis indica) contains as much as 20% or 25% tetrahydrocannabinol (THC), the chemical that induces a “high.”  Hemp (Cannabis sativa) contains less than .3 percent THC.

One of the most versatile plants on the planet, hemp’s seeds, fibers and oils can be used to make health supplements, paper, fabric, biodegradable plastic, biofuels and even cars and airplanes.

Hemp advocates view it as a super plant — one that can bolster the U.S. economy, as well as arrest climate change.

The 2014 Farm Bill loosened restrictions, allowing hemp to be grown for research purposes only in states that made it legal. The new law allowed Indian tribes to partner with various states or universities to cultivate hemp on tribal land.

In mid-December 2018, Congress passed an 800-page farm bill that legalized the growing and selling of industrial hemp, and called on the U.S. Department of Agriculture (USDA) to develop rules on how hemp should be grown, inspected, tested and disposed of in cases where THC levels are too high. The bill also charged the USDA with reviewing and approving individual tribal hemp cultivation plans.

“Our tribal government, about two months ago, passed a 49-page plan and submitted it to the USDA,” said White Plume. “But we haven’t gotten any response yet.”

That’s because the USDA hasn’t yet published the new regulations, said Patty Marks, a Washington, D.C., attorney who represents the Oglala Lakota and hemp growers from other tribes.

The USDA promised to issue regulations in fall 2019 to accommodate the 2020 planting season.

Until the final rule is implemented, tribes, like states, must follow the rules set out in the 2014 Farm Bill. In other words, growing hemp only for research, not commercial purposes.

Colorado Gov. Jared Polis, right, looks over a pack made of hemp with Rob Bondurant, left, and Mark Galbraith of Osprey Packs of Cortez, Colorado, in the company’s exhibit at the Outdoor Retailer Summer Market in Denver, Colorado, June 19, 2019.

“So, Alex White Plume is in the limbo stage right now,” she said. “Alex is growing — and please put this in quotes — ‘against legal advice.’”

Marks admits the USDA faces challenges, the greatest of which is coming up with a nationwide THC testing standard.  Currently, several tests have been developed, but they vary in reliability, and an inaccurate result could force the grower into destroying his entire crop.

This week, White Plume says his plants will have fully matured, and he’s planning to take a sample of his crop to a testing facility six hours away in Boulder, Colorado.  If his plants test within legal limits and the weather — of late unpredictable — holds, his harvest could yield 2,700 kilos of product.

With the price of hemp across the country at about $85 a pound, he and his family stand to gain — or lose — a lot.

Either way, White Plume said he’s turning over the hemp growing to his grandson next year.

“I’m just getting too old,” he laughed. 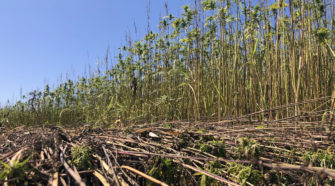