Colorado City, a town of less than 2,500 in southern Colorado, will soon be home to up to 50 million pounds of hemp, now that a massive-hemp processing facility is open for business.

Paragon Processing opened a 250,000-square-foot hemp-processing on facility Wednesday, August 29. Not only does the company say that the new facility is the largest of its kind in the country, but it could help bring 250 new jobs to Colorado before the end of the year, with a number of them located in Colorado City.

According to Paragon co-president Matt Evans, the facility will produce a variety of hemp extractions through isolation and distillation techniques, and soon will be processing around one million pounds of the plant each month. By the end of the 2019 harvest season, he wants to see that total hit two million pounds.

“With the legalization of the 2018 Farm Bill, the production and interstate transfer of hemp has increased the demand for both hemp and cannabidiol (CBD) products, and we aim to propel the industrial hemp manufacturing efforts in order to confidently answer this call,” Evans says in a statement announcing the new facility.

Colorado legalized hemp in 2012, when the state’s voters approved recreational marijuana, but the federal government didn’t come around on hemp until late 2018, when Congress passed the Farm Bill. With a six-year headstart on the majority of the nation, Colorado quickly jumped to the top of the list of states farming industrial hemp. However, hemp business groups have continued to call for more testing and processing facilities in the state. Paragon’s operation, located in a former Columbia House Records space and a Kroger distribution center, does both.

Now that more states are focusing on hemp, Colorado lawmakers point to the southern part of this state as a key destination for new hemp farmers and businesses. Rural areas with agricultural experience, such as Pueblo County, have welcomed both the marijuana and hemp industries, using them to help climb out of the steel and housing recessions with moderate success.

Governor Jared Polis’s administration has pushed for looser regulations on hemp farmers and businesses in order for this state to maintain its top spot in the hemp industry. During a recent speech at a hemp and CBD industry conference, Polis said that hemp farming was part of his rural economic initiative, and that he’d like to raise Colorado’s current 62,000 acres allotted for hemp farming by 20 percent.

Thomas Mitchell has written about all things cannabis for Westword since 2014, covering sports, real estate and general news along the way for publications such as the Arizona Republic, Inman and Fox Sports. He’s currently the cannabis editor for westword.com.

Next 'Is It Hemp? Or Is It Weed?' Waco Lawyers Croon About Texas Cannabis Law | Texas Lawyer - Law.com 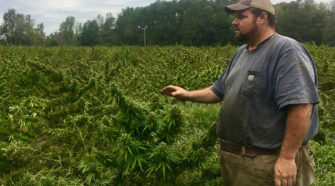