While the Navajo Nation Council was debating the merits of hemp production last year, a coalition of private and public entities was quietly doing it.

“Right now we have more than three million plants on 300 acres on the Navajo Nation,” said Karen Elsworth with the Native American Agriculture Company, which she said has been given exclusive rights by the Navajo Nation government to oversee the licensing, cultivation and processing of cannabis on the reservation.

The company plans to open a dispensary Oct. 5 in conjunction with the Northern Navajo Fair. It’s located at the intersection of New Mexico Highways 491 and 64.

Just to be clear, this is not marijuana we’re talking about. It’s hemp, a close relative with less than three percent of the psychoactive ingredient THC. So why would anyone want to buy it? Hemp contains cannabidiol, or CBD — a compound that has been credited with relieving everything from epileptic seizures to sleeplessness (in spite of scant scientific evidence for most of the claims).

Eventually, the Navajo Nation will have its own CBD brand, Navajo Gold, but for now, “we’ll be selling white-label products from other distributers,” said Ellsworth, who’s in charge of marketing and communications for the company. “This is sort of like a little test to see if the demand is there.”

Based on sales in the rest of the country, the demand will be there. Americans spent $190 million on CBD products in 2017, and that was even before the 2018 Farm Bill deregulated it. Eventually, NAAC would like to lease 10,000 acres from the Navajo Agricultural Products Industry to grow hemp, but for now the company, which is headed by former Navajo Nation presidential candidate and current candidate for Congress Dineh Benally, has enlisted 29 Navajo farmers to grow test plots.

Benally also leads the San Juan River Farm Board, so he has a lot of contacts. This year, admitted Ellsworth, it didn’t go so well. “Nobody knew what they were doing,” she said. “Mostly, it was a matter of digging the trenches and getting irrigation water to the plants, which shouldn’t be a problem at NAPI.”

Seeing the need for education, the company is offering a free seminar on hemp production Oct. 21, and those who decide to pursue it can follow up with a two-week training academy. Partnering with MYM nutriceuticals, Aqueous International Corp. and its parent company One World Ventures, NAAC has an exclusive contract to recruit international investors and organizations to back hemp production on the Navajo Nation.

“Because you’re a sovereign nation, you can do whatever you want,” said Ellsworth, noting that some states are taxing the industry at rates up to 47 percent, forcing growers to look for greener pastures. Labor costs also tend to be lower-than-average on the Nation. The Nation will be able to reap the benefits of hemp production through its tax structure, Ellsworth noted, adding that a portion of all Navajo Gold’s profits will go toward “helping various community programs.”

For farmers, hemp is an easy-to-grow, low-water crop that also replenishes the soil. “It’s a little miracle plant,” said Ellsworth. Eventually, NAAC would like to turn the regulatory end of things over to a tribal entity, Ellsworth said, and back out of the business. “We don’t want to own or operate anything,” she said. “Really, they just needed somebody to take the horse by the reins and lead it. “Now that we’ve got everybody’s attention, things will start happening. These are very, very exciting times.”

Next Kings County growers ready for hemp harvest, what the public should know - Hanford Sentinel 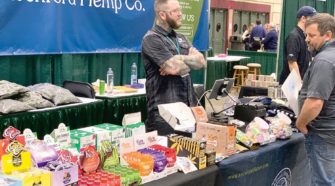