Less than two weeks after the U.S. Department of Agriculture (USDA) opened a public comment period on proposed hemp regulations, more than 500 people have already weighed in.

USDA issued an interim final rule last month, laying out basic regulatory guidelines for hemp manufacturers. It contains information on a wide-range of issues, including licensing, THC testing requirements and the disposal process for crops the exceed potency limits.

Advocates and industry stakeholders have expressed mixed feelings about the rules. While the release of the regulations represents a positive development, with farmers soon to be equipped with the tools needed to fully enter the market, there are certain provisions that businesses have regarded as excessively restrictive and possibly damaging to the industry.

Those concerns, and others, are reflected in the comments submitted so far. Here are some highlights:

Christopher Gromek, a Washington State-based hemp business owner, said that USDA should allow growers to address so-called “hot” hemp containing excess THC before the crops are ripped up and thrown out.

“The USDA should allow farmers to remediate THC levels in ‘hot’ hemp by allowing them to (through sunlight/time etc. degrade the THC levels in their hemp until they are suitable for sale,” he said. “If farmers are allowed to remediate ‘hot’ hemp prior to sale, they’ll still be able to utilize most currently available genetic stock, while simply adding a processing requirement to ensure hemp of required THC levels is being sold.”

A significant number of people voiced frustration over the THC limit and how it will be tested for, with multiple stakeholders saying that testing should be limited to delta-9 THC, not the entire spectrum of THC content.

“As a farmer and someone who has worked in the processing of hemp,” Barbara Sisson said. “I am concerned with the matter of the total THC being used against farmers within the industry. This is something that needs much further research.”

“Testing of hemp to determine compliance with the 0.3% THC limit should not be done post-decarboxylation,” Zachary Farber wrote. “Doing so will make it significantly harder for hard-working hemp farmers to produce legal hemp.”

“The current testing requirements are already sufficient to ensure no psychoactive effects will be elicited from smoking the plant material,” he said. “The current available genetics would make it incredibly difficult for farmers to comply with the regulations.”

Several commenters recommended that the allowable THC content be increased from 0.3 percent to 1 percent, and some advised that the timeline for testing should be amended.

“We absolutely need a 30 day or more prior to harvest testing window, 15 days is not enough time to harvest,” one person said.

Another person weighed in on the proposed ban on being a “key principal” of a hemp business for those with felony drug convictions. While the ban expires after 10 years—a compromise that advocates hashed out with lawmakers—an anonymous commenter said “it is inconceivable that those most negatively impacted from prohibition would be barred from participating in the new legal economy.”

An Oregon-based hemp farmer raised an interesting point with respect to the requirement stipulating that only Drug Enforcement Administration (DEA)-registered facilities can test the crop. Jesse Richardson said the only such facility in the state is the Oregon State Crime Lab.

“From our understanding, many existing labs are unable to be DEA certified because they also service marijuana businesses, which is still a Schedule 1 Substance under the CSA,” Richardson said. “A single lab cannot handle 750+ growers in Oregon. Existing labs should be permitted service providers. These are quality, trusted labs we have worked with for years.”

In a related development, the advocacy organization U.S. Hemp Roundtable sent a letter on Tuesday thanking USDA for developing the interim rule and allowing stakeholders to submit input on the proposals. It pointed to a number of elements that the group “applaud[s]” such as one stipulating that interstate transportation of hemp products is permissible and another that provides some flexibility in THC testing.

But group’s message to USDA Under Secretary Greg Ibach also makes clear it is concerned about provisions that penalize farmers for cultivating hemp with more than 0.5 percent THC, require farmers to destroy unauthorized crops that could instead be used as a “soil amendment” or for research purposes, force hemp to be tested only in laboratories registered with the DEA and mandate that testing be done within 15 days from harvest.

“Resolution of these issue could have a positive impact on the developing hemp market, as well as promote future innovation,” the group wrote, adding that it  plans to formally submit a comment to USDA soon.

People can submit comments through December 31, after which point USDA will work to finalize the interim final rule for hemp. It’s not clear to what extent it will take submitted recommendations into consideration and amend the regulations; however, as U.S. Hemp Roundtable pointed out, the department appears to be receptive to feedback.

Meanwhile, the industry is still awaiting draft rules for hemp-derived CBD products from the Food and Drug Administration (FDA). Officials from the agency have indicated that there are complicating factors that make it difficult to develop regulations for the cannabis compound, and former FDA Commissioner Scott Gottlieb said it may take years for rules to be released without congressional action.

Next Hemp License Applications Are Open for 2020 - Shepherd Express 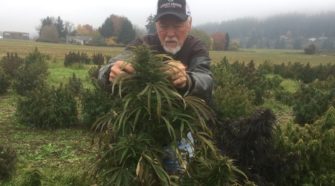