Leaders of a handful of Missouri hemp association groups have implored the Parson administration to take advantage of a federal provision allowing the state to operate its new hemp program under state statute for 2020.

The U.S. Department of Agriculture’s (USDA) final interim rules allowed states to operate under their own statutes — as authorized under the 2014 Farm Bill — for the 2020 growing season.

An open letter from four organizations’ leaders Tuesday asked Gov. Mike Parson to take advantage of that extension and proceed under rules set forth in a sweeping agriculture bill that went into effect this year. Then, Missouri would not need to submit a state plan to the USDA until July and could continue with its own procedures — including finishing out the comment period ending in less than a week — throughout 2020.

“Our most immediate concern is that we stand as a state behind the statutes that we have all worked diligently to establish over the last years and that our law becomes part of the voice to affect the conversation on the national stage,” the letter, obtained by The Missouri Times, said.

“Together, with our associations, together as the State of Missouri, and together with our surrounding states and hemp associations, we do have a voice. We have an opportunity to continue to have a voice in 2020. We ask for your support and offer our help in establishing Missouri and the Midwest as the cornerstones of the industrial hemp industry.”

Morgan stressed the extension would allow associations and those involved with the industry more time to influence and understand the USDA’s rules.

“All we’re asking is Missouri does not immediately file a state plan with the USDA. Otherwise, we’ll be forced to operate underneath their guidelines. And those guidelines are subject to change because their interim final rule only lasts for a 24-month period,” Morgan told The Missouri Times.

Morgan said there are a few “issues” with the proposed federal rules he would like to see addressed and stressed the importance of a unified “Midwest voice” in steering these programs.

A spokeswoman from the Governor’s Office did not immediately respond to a request for comment Tuesday.

The Missouri Department of Agriculture’s proposed regulations remain open for comments until Dec. 1.

Kaitlyn Schallhorn is a reporter with The Missouri Times. She joined the newspaper in early 2019 after working as a reporter for Fox News in New York City.

Throughout her career, Kaitlyn has covered political campaigns across the U.S., including the 2016 presidential election, and humanitarian aid efforts in Africa and the Middle East.

She is a native of Missouri who studied journalism at Winthrop University in South Carolina. She is also an alumna of the National Journalism Center in Washington, D.C.

Previous Some Farmers Are Going All In On Hemp. But Could It Be The Next Emu? - KUT 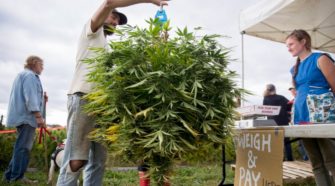