MINNEAPOLIS (WCCO) — It has been nearly a year since the United States Congress renewed the farm bill. The legislation allows CBD, or cannabidiol, production throughout the state.

CBD sales could top $1 billion this year — and Minnesota producers hope to cash in.

Zach Rohr and his partner, Den Davis, are turning raw hemp into CBD oil in a former peanut butter plant in Cannon Falls for their company BZ Sciences, and their CBD product line, Minny Grown.

They grow some of the hemp themselves and source the rest from Minnesota farmers. A large portion of their hemp plants come from farms in Mankato. All of their raw product is organic and Minnesota-grown.

“We’re coming up on our one-year anniversary soon, and it’s been a wild ride,” said chief of operations Ben Davis.

They will mill the hemp flowers before they extract and distill it using a cold ethanol tank. Then it’s loaded into an evaporator which extracts the ethanol leaving them with CBD oil.

“You’re building supply chain from the bottom up all the way from seed to sale,” said CEO Zach Rohr.

Davis and Rohr both came from farming families, but Rohr’s legal training is coming in handy as they charter legal ups and downs, and changes in regulations.

“The industry is still really getting off the ground,” Rohr said.

Despite that uncertainty, the Minny Grown men think the future of Minnesota CBD is bright.

“Everything is organically cultivated in the state of Minnesota, so we’re trying to set up a supply chain that gives farmers an alternative crop to grow,” Rohr said.

Davis says hemp grown in the Midwest is more sustainable.

And they hope their dream to cash in will help others along the way.

The Minny Grown product officially hit shelves in October. You can find it in nearly 20 stores across the state, including Nothing But Hemp stores.

Next Bath EDA to participate in industrial hemp project - The Recorder

For Young Farmers, Hemp Is a ‘Gateway Crop’ – Civil Eats

Senate to vote on hemp, but funding still in doubt – Kotatv 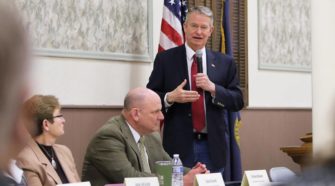