WASECA – Midwest Hemp Farm recently opened in Waseca’s Industrial Park, including a public walk through a few weeks ago.

“People liked it (and) thought it was informative,” Matt Little, one of the primary owners, said. He also mentioned city officials have been really open and welcoming, especially Councilor Ann Fitch and Mayor Roy Srp.

The Midwest Hemp farm is part of the Minnesota Industrial Hemp Pilot program along with the 37 other hemp farms registered in Minnesota as of 2017. The pilot program was designed to study the growth, cultivation and marketing of hemp and last year alone grew 1,205 acres.

The license each hemp farm has under this program expires on December 31 of the year issued and they must re-apply to the program each year.

“It’s very exciting what’s going on out there,” Srp said.

The hemp farm is not open to the public in the sense of a traditional business. It is a farm crop that is harvested and sent on to a manufacturer to produce a product called CBD oil, short for Cannabidiol, which is extracted from the seeds of hemp. The plant seeds are harvested by hand and then sent to a plant for extraction.

The harvesting process is labor intensive with 14 people who helped with the outdoor harvest this year and a potential of 30 people needed for next year’s harvest, according to Little. The hemp farm in Waseca is an indoor and outdoor operation with 12,000 plants inside and 30 acres outside in the Winnebago area.

About four weeks before the harvest the employees at Midwest Hemp will start testing their crop to make sure it falls in line with the Minnesota regulations. If the crop is above .3% THC and fails to meet the requirements of the state, the entire field is burned.

Tetrahydrocannabinol, or THC, is the chemical in cannabis sativa plants like hemp and marijuana. An often misconception, one some people have already called the city about, is that hemp is the same as marijuana. Not true.

Hemp and marijuana come from the same cannabis sativa species but are genetically distinct and are further distinguished in their chemical makeup and cultivation methods. The difference is hemp contains .3% THC or less which makes it non-psychoactive compared to marijuana which contains a high amount of THC making it psychoactive and typically causing a user to feel high.

The plan is to eventually do seed-to-sale, according to little, in which Midwest Hemp Farm will sell the CBD oils online for people or businesses to purchase.

The employees at the hemp farm make sure the plants are in proper growing conditions to assure the quality, he said. They have hired a horticulturist who helps guide the care of the plants. The plants are fickle and take a ton of energy to grow, they said.

Since federal agencies do not currently recognize industrial hemp as an agricultural crop, hemp farms can not be covered by insurance and many financial institutions are hesitant to provide services. Little says he’s not worried about break-ins or people taking the delicate plants because they are well-equipped with security and the police are aware they are there.

“We are grateful to have Matt (Little) and Garth (Carlson) here (in Waseca),” Srp said. Little and Carlson are two of the primary owners of the hemp farm.

There are different species of hemp which provide different benefits. There are some strands that are heartier that are used to make rope, though the strand grown in Waseca is used for CBD oil which some claim pain relief properties.

Little says he has experienced first-hand the effects the CBD oil can have. He has had chronic back pain most of his life and did not know what to do. His girlfriend suggested he try a drop of CBD oil on his tongue to treat the pain.

“In five minutes the pain melts away,” Little said of the effects CBD oil has, which is why he still uses it regularly for his pain.

Hemp is one of the oldest crops in the world that was first discovered in Central Asia. Little sees hemp as a viable third crop rotation for farmers to use in the future. 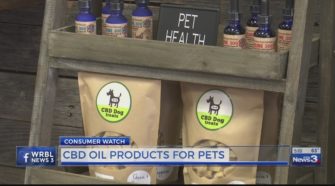