(Editor’s Note: This is part of an occasional series of regional reports looking at the 2019 hemp production season leading up to harvest. To read an earlier harvest preview on the Midwest region, click here.)

A soggy spring and humid summer have challenged hemp producers in the mid-Atlantic states, where cultivars bred for drier climates have struggled in the 2019 growing season.

In the absence of federal hemp production guidelines from the U.S. Department of Agriculture (USDA), hemp farmers are relying on state-level expertise to oversee the new crop.

In Pennsylvania, crop specialists like Alyssa Collins, director of Pennsylvania State University’s Southeast Agricultural Research and Extension Center, and Krystal Snyder, a Penn State horticulture extension educator, have been guiding farmers and watching how the new crop performs in the region.

According to estimates by the Pennsylvania Department of Agriculture, most hemp permit holders in the state are growing for CBD, accounting for 80%-90% of the crop, while the rest are growing for fiber or producing a dual-purpose crop.

Pennsylvania gave hemp production permits to 319 farmers, who planted approximately 8,000 acres this year. The crop is being grown in 63 of the state’s 67 counties.

Collins and Snyder said a major concern this year is that only half of the fiber producers and only about 25% of flower producers have contracts with buyers to purchase their crops.

Here is the rest of their season summary:

Temperatures were fairly normal in 2019 for the region, but Pennsylvania experienced above-average rainfall from May into June. This delayed planting, especially for CBD plants, as most fiber and grain crops were planted earlier.

Summer precipitation was light from mid-July through late September.

The soggy spring left farmers unable to work the ground or get into their fields with transplanters, drills and planters until past the ideal planting dates.

This impacted biomass production for fiber and CBD crops, since the plants had less time to put on vegetative growth before flowering.

Because the wet weather held up planting in the fields, transplants were held in the greenhouse longer and some plants became root-bound, meaning their roots grew matted from staying too long in a container, making it hard for them to get established when planted in the field.

Other plants did not establish roots properly when planted in wet fields.

Leaf-spotting fungi was widespread in early August, especially on CBD varieties. Fiber and grain hemp varieties were also susceptible. This could impact both yield and extract quality.

Most of the CBD genetics produced in Pennsylvania this year originated from breeders in drier climates like Colorado and Oregon, making them vulnerable to the humidity of the mid-Atlantic region, where fungal pathogens thrive. This will continue to be a challenge for Eastern growers until disease-resistant hemp varieties and fungicides are available.

Botrytis (gray mold) and Phytophthora (root rot) were also present but not widespread.

Corn earworms and other caterpillar species fed on flower buds and seed after plants set flowers, infesting 20% of the ripened seed heads in the Penn State grain trials. This level of pest pressure wasn’t seen in previous seasons.

No pesticides are approved for hemp in Pennsylvania on the crop and very few growers used biocontrols this year.Fertilizers

Grain and fiber farmers generally used granular fertilizers and manures to bring their fields up to the needs of the crop.

Some fiber growers chose European varieties like Futura 75 or Bialobrzeskie.

Central Pennsylvania farmers planted dual-purpose Canadian varieties like CRS-1, which can grow well in the area but don’t get as tall as they do in Canada, limiting biomass yield.

Some hemp farmers are growing for CBD produced autoflower varieties like Autopilot 1. Other prevalent varieties included:

About 60% of Pennsylvania farmers planted seed versus 40% clones. Most CBD farmers were able to source what they wanted this year, but they may not have been certain about what to look for in genetics.

Seed was available domestically for fiber and grain production, but only one or two varieties were available locally. Farmers were uncertain about which varieties to grow, as fiber variety trials have largely eluded the region.

Germination of grain and fiber varieties ranged from 70%-96% in tests, but field-sown crop germination rates were lower.

CBD transplants showed germination rates around 85%-90%, but transplant shock caused losses. Male seeds were found in what was claimed to be feminized seed.

Harvest started in mid-August for fiber crops and is ongoing. Grain crops are also being harvested.

Fiber growers are using sickle bars and discbines to mow crops and hay equipment to condition and bale after retting in the field.

Grain growers are combining the heads, then mowing the stalks.

Early CBD harvest started in late last month and will last through mid-October as long as the frost holds off.

Custom whole plant CBD harvesters have been spotted in Pennsylvania, but most small growers are hand-harvesting.

About 50% of the farmers who planted fiber contracted with a processor ahead of planting.

Some grain farmers either own a mill or have a relationship with a mill that will press seeds into oil, but most grain farmers and buyers haven’t disclosed sales plans.

An estimated 25% of CBD growers have a contract in place for drying, processing and selling their crops this year, while the rest have no known plans.

Previous Hemp: 'It's a Money crop' - Herald and News 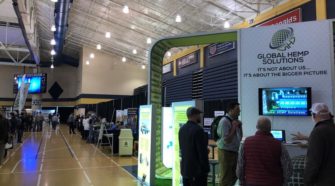