BLANTYRE – In Malawi, parliament has passed a bill which allows cultivation of cannabis for industrial and medicinal purposes. Backers of the bill say cannabis will boost the economy, which is largely dependent on tobacco. Anti-drug campaigners and religious conservatives say the move will encourage recreational use of marijuana.

“I am very happy that finally the bill has passed because when I was starting this issue people thought I was crazy,” he said.  “They called me names. The national assembly, in fact, the first day laughed at me; they booed at me. But I was determined because I had the facts on my fingertips.”

Kadzamira says the facts included research showing that hemp — a non-drug product of cannabis — can be used to produce soap, lighting oil, medicines and other useful products.

Malawi is now one of five southern African countries  — along with Zimbabwe, Zambia, Lesotho and South Africa — that have legalized industrial hemp. South Africa went a step further in 2018 by decriminalizing recreational use of cannabis.

Various varieties of the industrial hemp which was grown on trial basis at Chitedze Research Station in Lilongwe. (Lameck Masina/VOA)

Ben Kalua is an economics professor at Chancellor College of the University of Malawi. He says legalization will help the country diversify its agriculture-based economy.

“It’s economically viable because it has a very long value chain. It has so many by-products of industrial hemp including fiber for construction. There are all products that can be derived from that plant compared to tobacco,” he said.

Malawi has long relied on tobacco, which accounts for about 13 percent of its gross domestic product and 60 percent of its foreign exchange earnings.

Over the years, however, tobacco prices per kilogram have fallen, largely because of anti-tobacco campaigns and fewer people smoking.

Tobacco farmers like Hartley Changamala say they feel they now have an alternative.

He says, “Some of us are growing tobacco because we don’t have an alternative crop to bring us income. But those who knew that tobacco farming has now become useless have stopped. So with legalization of the industrial cannabis, I feel I can benefit a lot as a farmer.”

Anti-drug campaigners and religious conservatives continue to argue that legalizing cannabis will encourage recreational use of marijuana.

Nelson Zakeyu, an executive director for the NGO Drug Fight Malawi, says, “Why I am saying this is that there is very minimal difference in appearance between the two: Indian hemp [marijuana] and this industrial hemp. So that’s where the danger is, because many will be [taking] the Indian hemp as if they are taking the industrial hemp. So, we will end up having abnormal citizens in the country.”

Researchers say industrial hemp has a very low amount of the substance in marijuana which makes people high.

Malawian President Peter Mutharika has until March 19 to sign the cannabis bill into law. The president has not indicated what he will do.

The Rise of Organic Cannabis in North America 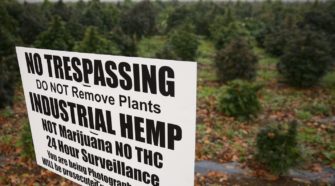