FALLON, Nev. (KOLO) — In your next Made in Nevada report we’re featuring Western States Hemp.

Four years ago in 2016 growing hemp was illegal in Nevada.

However, that has since changed. Andrienne Snow and Joe Frey invited KOLO 8 News Now to their ranch in Fallon for a tour of their operations.

The Company plants and harvests about 100 acres of hemp each year.

“It’s very exciting to be a part of an up and coming Company right now,” said Western States Hemp employee, Corrie Behimer.

Western States Hemp is one of the first places in Nevada taking economic advantage is this relatively new opportunity.

“We’re in a market right now that hasn’t been discovered before,” said Corrie.

“What we have here is this fiber you hear people talk about hemp fiber. That’s the outer skin and we’re just pulling that off…the fiber can be used for many things including clothing, which actually this shirt is made out of hemp fiber,” said Western States Hemp, CFO Tom McCullough as held a hemp plant and pointed to his shirt.

Hemp can also be made into paper building materials like insulation and fiberboard; industrial textiles, like rope and carpeting; body care products like soaps and lotions; and industrial products like oil paints, and more.

“Both BMW and I think Mercedes are using hemp bioplastic in the internal components of their cars right now. The internal part of the stalk is called a bast. It’s very tough. It’s like wood. Bast can be used for many individual purposes. It can be used for building,” Tom said.

You’ll likely see more of these products in your everyday life because President Trump signed a 2018 farm bill taking hemp off the controlled substance list and making it legal to transport.

Hemp’s long and difficult history comes because of its relationship with marijuana. They belong to the same species of plant called cannabis sativa, but this is where the similarities end.

Hemp contains little to no THC, which means you can’t get high from smoking it. It does however contain CBD.

CBD has no “high” or psychoactive effect and is legal in all 50 states. CBD is said to reduce anxiety and is touted to have many health benefits, but because of a lack of research there’s still a lot to learn.

This history explains why hemp is new all over again.

The video attached to this online report will show you the basic process Western States Hemp uses to grow and process this crop.

“All of these plants in here are female plants and the genetics that we have cultivated, we’re selecting plants over the last few season that have the strongest attributes for CBD production, nematode resistant, pesticide resistant,” she said.

The THC in these plants, which is what gives marijuana smokers the high, is .3 percent or less. This is the qualification to classify plants as hemp and not marijuana.

However, the hemp plants she grows inside her hoop houses contain between 10 and 15 percent CBD.

“We will take cutting repeatedly off those same plants and basically reproduce the same exact plant over and over,” said Andrienne.

These plants are transplanted in nearby fields during the summer to produce plants with potent CBD levels.

“So there is really two different kinds of hemp being cultivated in the U.S. right now and that would be grain and fiber type hemp and that’s the traditional single stock that grows between 12 to 14 feet,” said Andrienne.

This kind of hemp is used for textiles, rope, and paper production. These varietals contain minimum amounts of CBD production, but have a lot of industrial applications.

The more common crop taking over the United States is the high CBD plant, which looks more like a marijuana plant.

Western States Hemp is the only business in Nevada to grow both kinds of hemp. It’s hand-shucked and dried in a large machine.

The hemp is then placed in a super sack. Each one is filled with bio-mass which consists of hemp flowers and leaves.

“Most everything here is a high CBD cannabis plant that has has most of the THC bred out of it,” said Andrienne.

Nearly 100 bags sit in an inside storage area and more sit outside. Each weighs more than 100 pounds. They will each be shipped for processing into one of many possible products.

Western States Hemp makes two products. One is called “CBD Relieve Balm” and the other is CBD tea.

The next step forward for Western States Hemp is to build the infrastructure to make more finished products from the hemp it grows.

Previous An Exploratory Journey into the Past, Present, & Future of Hemp - sxsw.com 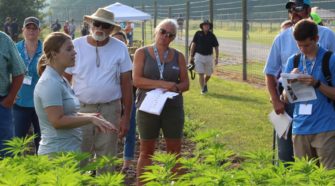