As hemp continues to gain popularity across the region, local law enforcement officers are finding it difficult to differentiate this legal product from illegal marijuana, requiring them to submit evidence to backed-up state laboratories.

“There’s no way under a trained eye or even a trained microscope that you can tell the difference between hemp and high-grade marijuana, so I think that you can only imagine the investigative nightmare or hurdles that that would present,” said Tennessee Bureau of Investigation Special Agent in Charge Tommy Farmer.

Marijuana plants are seen in Chicago where officers say they discovered two football fields worth of pot plants growing on the city’s South Side.

The TBI crime labs in Knoxville, Nashville and Memphis are on pace in 2019 to receive more than 10,000 submissions of green leafy substances, more than methamphetamine, heroin or cocaine. Forensic scientists are now conducting considerably more tests than in the past, the TBI recently said.

The average turnaround at the Knoxville facility is about 30 weeks, but prosecutors can ask for a rush. Sullivan County District Attorney General Barry Staubus said the delay increases the time for handling and resolving cases.

For all its visual similarities to marijuana, industrial hemp differs in one important way — it lacks enough of the psychoactive drug THC to result in a high for users.

The 2018 Farm Bill defines hemp as the plant species cannabis sativa L and any part of that plant, including the seeds and all derivatives, extracts, cannabinoids, isomers, acids, salts and salts of isomers, whether growing or not, with a delta-9 tetrahydrocannabinol concentration of not more than 0.3 % on a dry weight basis, according to the U.S. Department of Agriculture.

Delta-9 tetrahydrocannabinol, or THC, is the primary intoxicating component of cannabis. Cannabis with a THC level exceeding 0.3 percent is considered marijuana, which remains classified as a schedule I controlled substance regulated by the Drug Enforcement Administration.

With an increase in hemp production, law enforcement officers and prosecutors are working to differentiate legal hemp and illegal marijuana.

In Virginia, the state Department of Forensic Science tests substances for law enforcement. Like Tennessee’s labs, Virginia’s have been working throughout the year to catch up with the legalization of hemp, developing procedures for testing substances.

With more submissions, to determine whether the substances are hemp or marijuana, the TBI is testing all felony amounts of plant material that is presumptively marijuana, and any other submissions as requested by a district attorney general, to include misdemeanor amounts.

» Production of cannabinoids, including cannabidiol or CBD

Tennessee officials say they are on the leading edge of developing crime laboratory methodology to cope with the challenge, and the state is one of few currently performing THC quantitation on plant material in a state crime lab.

The increase in submissions has resulted in a need for more staff at the TBI crime lab, according to forensic supervisor Michael Bleakley, who said the agency needs between 10 and 20 new positions across the state.

In late August, district attorneys general and law enforcement officials across Tennessee received notification from the TBI Forensic Services Division of additional testing to differentiate between hemp and marijuana.

“There is no real way to tell the difference in the field,” said Bristol Tennessee Police Department Capt. Charlie Thomas.

Hemp and marijuana look and smell the same, Thomas said.

If officers suspect the green leafy substance is marijuana, it is sent to the laboratory.

“If it tests positive for THC, then it is considered marijuana, and we would consult the DA’s office in regard to charges,” Thomas said.

On both sides of the state line, authorities send the substances to state chemistry labs to determine the amount of THC.

“It is my understanding the TBI will only test these substances for the presence of THC,” Thomas said. “Hemp is not supposed to test positive, marijuana is. If we have reason to suspect it is marijuana, then it gets sent to the lab.”

If the substance tests positive for greater than 0.3% THC, the police consider the substance marijuana and consult with prosecutors regarding criminal charges.

In the field, Thomas said how and where the substance is found is important in helping determine whether it might be hemp or marijuana.

Staubus said he believes there are currently inadequate resources for law enforcement regarding legal hemp and illegal marijuana.

More resources are needed because only the TBI lab tests the substances, and that’s only when necessary for trial, Staubus said. He said more equipment is needed, but that costs money.

There are things that law enforcement can look at to determine the difference — other than the color and smell — such as whether there are rolling papers, scales or plastic bags, which Staubus said would indicate marijuana. The person’s cell phone records may also indicate whether they are involved in drug use or sales, he added.

As for cultivation and transportation of legal hemp, the person should also have a permit, Staubus said.

The prosecutor said he anticipates this to be an issue due to an increasing number of legal hemp farms in the region.

Deputies in Southwest Virginia are also becoming familiar with the differences between hemp and marijuana.

The Wise County Sheriff’s Office has test kits for marijuana and the low levels of THC found in hemp would create a less than positive result, according to Sheriff-elect Grant Kilgore.

“My understanding is that it would take a tremendous amount of hemp to have any kind of euphoric effect,” Kilgore said. “Users of marijuana would know there is little to no value of smoking hemp, because of the extremely low level of THC, and that low level would not provide the high which is desired by the user.”

Kilgore said he is not overly concerned about hemp because it has almost no euphoric value. He added that it should be closely regulated and growers held accountable for security of their crops.

“Hemp has a lot of value as an industrial product and could bring new jobs and opportunities to our region,” Kilgore said.

In Bristol, Virginia, Police Sgt. David Slagle said misdemeanor amounts of marijuana can be field-tested by Department of Forensic Science-approved kits. The accused has the option of having the sample independently tested, Slagle said.

Any felony amounts of marijuana must be submitted to the state lab for analysis, he added. In Southwest Virginia, law enforcement agencies send evidence to the Department of Forensic Science lab in Roanoke.

Sullivan County Deputy Justin Bays and his K-9 partner Jagger demonstrate how the dogs are trained to search cars for illegal drugs.

TBI officials said recently that K9s are unable to tell the difference between marijuana and hemp.

So far, however, Sullivan County Sheriff’s Office Sgt. Kris Thomas, a K9 officer, said he has not yet discovered hemp when searching.

“It all looks and smells the same,” Thomas said of marijuana and hemp.

Local police departments use real marijuana to train dogs. Bristol Tennessee police have a license through the Tennessee Department of Health and the Drug Enforcement Administration to use marijuana in training dogs.

Sullivan County deputies have no way of conducting a field test at the scene so all substances are sent to the TBI crime lab in Knoxville.

With small misdemeanor amounts of substances, individuals can be given a citation, and the suspected drugs are taken to the TBI for further evaluation, Kris Thomas said. With larger amounts of drugs, narcotics officers are called to the scene to continue investigating. Arrests can be made, but the drugs are still sent to the TBI, he said.

The TBI crime lab has provided hemp samples to K9 handlers for them to experiment with during training.

“They confirmed what they feared, which was their dog simply cannot tell the difference between hemp and marijuana,” said Mike Lyttle, assistant director of forensic services.

In order to determine whether a substance is marijuana or hemp, TBI forensic scientists conduct a three-step color process.

Bleakley, the forensic supervisor in Knoxville, said the first and second tests can be completed in a matter of minutes, with just a couple of chemicals. The third test is more complicated and takes hours, Bleakley said.

On Nov. 8, the Virginia Department of Forensic Science said it ordered about 16,000 field test kits, which would be distributed across the state.

If it appears to be marijuana in the field in Virginia, the substance is submitted to the state lab.

“Thank you for your continued patience as we work through the validation and implementation of new methodology to differentiate marijuana and hemp,” the letter states.

Thomas, in Bristol, Tennessee, said he understands that field tests are unreliable for differentiating between hemp and marijuana. In addition, Thomas said there are people adulterating these substances with things like fentanyl and methamphetamine, and officers are being exposed to it during the testing process. 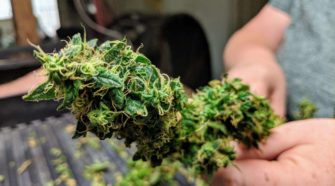