In rural Fulton County, a family farm has added hemp to their crops.

FULTON COUNTY — In rural Fulton County, a family farm has added hemp to their crops.

Kathy Beekman received licensing from the State of Illinois earlier this year and has recently harvested her first round of hemp.

The 140 acre property is the former family farm of her husband, Steve. Steve, who is employed as an animal control officer for Fulton County, also assists in the harvest and production.

One acre was utilized for hemp; about 1,500 plants which were seeded and planted by hand.

The plants were also watered by hand, and the Beekmans use farming equipment from the 1950s owned by Steve’s family.

The hemp is planted out in the field, then transferred to the greenhouse once ready to be dried and bucked.

Higher quality better buds are kept in a climate-controlled room where they are further processed and inspected.

They only grow hemp; the Beekmans do not sell to the general public.

Hay and alfalfa are also farmed on her land.

Beekman has a background in horticulture and environmental anthropology. She previously worked as a grower at the marijuana cultivation facility in Vermont.

Beekman quit her job at the grower facility as she was struggling to juggle both the job and her responsibilities on the farm.

A few months after leaving the grower, she learned of an opportunity to grow hemp at her farm.

“This is what I love to do,” Beekman said. “I love growing. Hemp is so unique and versatile.”

In addition to CBD oil, hemp can also be used in creating a wide variety of items, from clothing to concrete.

“If you’re doing it to get rich, don’t do it,” she added. “You start small and figure out how you want to do it. You have to have a passion for it.”

Now that the first harvest is over, Beekman says she has learned what she wants to change for the next season.

“I’m thankful I had the opportunity to do this,” she said.

Previous Hemp can soon be grown in Louisiana - ArkLaTexHomepage 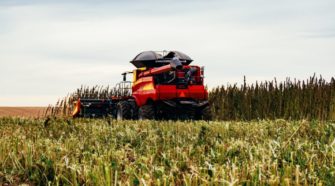