SPEARFISH, S.D. — Voters who wanted to learn more about the issue of industrial hemp were able to attend a forum with legislators at Black Hills State University, Thursday.

In attendance was an actual hemp farmer, Nevada Ellison, who farms in the Southeast corner of the state of North Dakota. His experience is that hemp can be very profitable.

“It was sixty acres and I think we paid about four or five grand for seed – which is a lot less than corn,” Ellison said. “Probably half of what you pay for corn. Economically, because not many people were doing it at the time it was really beneficial to us because we were making four to eight hundred dollars more per acre than we were corn.”

In North Dakota, farmers wishing to grow hemp have to be enrolled in the North Dakota Department of Agriculture Pilot Program. The Agricultural Act of 2014 states that cultivating hemp is restricted to research. In 2018 dozens of farmers enrolled for almost 3,000 acres of hemp farming.

Ellison said that he – like many of the other farmers in the program – bought their seed from a reputable company in Canada because it was easier than dealing with interstate commerce.

Representative Jeffery Partridge and Whitney Raver, running for U.S. Representative, were a part of the same panel as Ellison. They were able to answer questions about why South Dakotans were waiting for a similar program. A member of the public asked why Governor Kristi Noem was against hemp. Rep. Partridge responded that the governor is concerned about the law enforcement who have to discern hemp with or without THC in the field and that she believes it will lead to recreational marijuana legalization.

“She’s looking at these other states,” Partridge said. “And saying, you know, if you’re trying to move down a marijuana path for recreational plant or medicinal or whatever, she’s concerned that this is one way you could do it. Then it gets really difficult for law enforcement to actually do the testing. I think that’s one of the things that’s got her locked in on this, is what happens on our highways and roads, as far as what’s happening with the hemp.”

Governor Noem has been asked about her stance on hemp in the past. As part of a tour, in Rapid City, Dec. 4th, she addressed questions on hemp.

“In my budget, to address hemp,” Noem said. “I would have had to add dollars to set up a state program. I did not choose to do that at this time. I know there will be legislation that will be coming during session that legislators want to support, setting up a statewide hemp growing program. And I’m sure they’ll have that debate.”

The federal government passed a farm bill in 2018 that makes it legal to grow hemp. 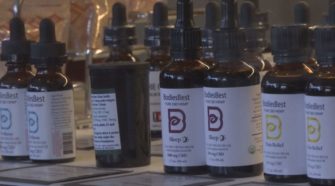