Legal hemp in the U.S. has lawmakers and regulators in over their heads. Ironic to many in the heritage cannabis community, those who have recently been forced, politically or otherwise, to dive headfirst into managing legalization are learning a hard lesson: the end of cannabis prohibition is closer than they realize.

Taxonomically and scientifically classified within the cannabis genus, the hemp that President Donald Trump legalized with the 2018 Farm Bill is technically the same plant as marijuana (high-THC cannabis is now classified by the USDA as cannabis sativa L) which many have been duped into fearing for decades.

The truth of the matter is: by
continuing to define any cannabis plant with more than 0.3% THC by weight as
marijuana, the powers-that-be have opened up a Pandora’s Box of questions.

Whether high in THC or CBD or one of over 100 other cannabinoids found in this diverse plant, the truth is it’s all cannabis. It would be silly to say that two seeds from the same plant could produce two different species of plants (“hemp” vs. “marijuana”) just because one had better conditions and expressed higher levels of THC. That doesn’t make scientific sense. But in the hemp business, this actually happens all the time. Once a crop surpasses that 0.3% level of THC, it has crossed the line from “hemp” to “marijuana” and becomes contraband. Legalization with a healthy industry in mind was not fully considered. We are currently growing a nation full of what look, smell and act like high-CBD “marijuana” plants!

As research continues, we are discovering that more of the healing properties of cannabis are often found in the unique compound combinations of each strain (or even plant) as they interact with the person using them. What does nothing for you might get another person really high. It’s even more complicated though: cannabis seems to be able to produce nearly every smell and taste imaginable in the plant world, expressing over 100 different terpenoids and flavonoids.

While the intention was stopping
people from getting “high” by limiting the THC available, the nefarious
original crew of prohibitors were totally ignorant about the possibilities of
the cannabis plant.

In recent years, the demand for hemp products has increased. Specializing in the production of high-quality feminized hemp seed and biomass, Oregon-based Sovereign Fields has answered the call for boutique hemp.

Kush Hemp is their newly developed
strain that grows from the highest quality hemp seed into some of the dankest
smelling weed in the world! And, according to the government, it won’t get you
high.

This new hemp-hybrid cultivar comes
from a pre ’98 Bubba Kush via Humboldt Seeds and an elite CBD hemp cultivar.

While high in CBD (upwards of 20%)
and consistently low enough THC to be legal, Kush Hemp has cannabis consumers
salivating over the earthy, gassy and sometimes sweet Bubba Kush flavor profile
that is unmistakable. Touted as the world’s first smokable hemp, it is just one
example of what the future of craft cannabis holds.

Though there is much room for improvement on the legislative level, now that the days of draconian prohibition are over, Americans from coast to coast now have access to the benefits of cannabis. And this is only the beginning. Who knows what science, industry, and passion will discover as cannabis legalization gets realized to its full potential? Unwittingly, the United States government has kicked off our mission of discovery. Imagine the heights we will soar to as companies like Sovereign Fields continue to unearth the potentials of boutique hemp.

TELL US, would you try Kush Hemp? 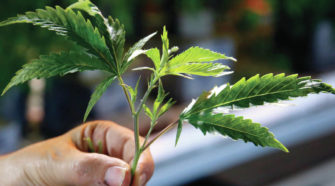