HANFORD — With the passing of the 2018 farm bill, industrial hemp was taken of the federal list of controlled substances, making it easier for farmers to grow the crop. However, challenges, uncertainties and misconceptions still arise from the little-known about plant.

Hemp comes from the cannabis plant, but does not contain high amounts of THC — the main psychoactive ingredient found in recreational cannabis products. Hemp can be used to make fibers, clothes, paper, oils and lotions, among many other items.

“It’s a very beneficial product,” said hemp advocate and farmer Charles Meyer “Many wonderful things are made from it.”

Charles Meyer, along with his son Charlie Meyer, just planted their first hemp crop — some 130 acres in Stratford.

The elder Meyer has been leading the way in hemp advocacy for around 20 years now.

Around that same time, Charles Meyer began researching alternative crops when the market for cotton was going down the drain. He came across hemp and realized that it was such a versatile crop and viable enough to keep a good market.

In support of the bill, Charles Meyer went to Sacramento many times to testify before various committees. The first time the bill made it through legislature and landed on then-Gov. Schwarzenegger’s desk, he vetoed it.

Charles Meyer said the governor was running for a second term and told him in a letter that he didn’t want to appear to be soft on drugs. He said the governor’s statement upset him because industrial hemp has nothing to do with marijuana.

After some tweaks and a second round through legislature, Schwarzenegger again vetoed the bill. The same happened when it came across former Gov. Jerry Brown.

Throughout this time, Charles Meyer said the only agencies that were testifying against the bills were law enforcement.

“According to them, all hemp was marijuana,” Charles Meyer said, adding they believed he was trying to circumvent the marijuana laws.

Due to the 2018 Farm Bill, industrial hemp is no longer classified as a controlled substance, though marijuana still is.

While industrial hemp plants may look like cannabis plants, they must test below 0.03% THC to be classified as hemp. Anything more than that percentage is considered marijuana.

Anyone who tried to smoke hemp plants would probably just get a headache, not high.

In Kings County, the Board of Supervisors have adopted an urgency ordinance on hemp as a placeholder until the state decides how it would like to regulate the industry.

While there is no acre limitation on industrial hemp — except for a 1-acre restriction on hemp used for research — the ordinance established setback for growers, like having to be ½ mile away from schools, daycares and certain residential areas.

All hemp grows are registered with the Kings County Ag Commissioner’s Office.

Mario Gutierrez, the deputy ag commissioner in charge of the county’s industrial hemp division, said there are currently 17 registered growers and one hemp seed breeder in the county.

Each registered grower is required to post signage around their hemp fields to let the public know that the plant is hemp and does not contain THC. The signs have registration numbers that can be referenced if anyone has concerns about the crop, said Kings County Sheriff Dave Robinson.

Robinson said his office has had some people call thinking the hemp was marijuana. He also said there have been a few instances where people pull up next to a field and steal a few plants, also thinking they’re marijuana.

Charlie Meyer said while some people may think stealing a few plants may not seem like a big deal, they are still valuable to the grower and could mean a loss of thousands of dollars.

Most hemp fields in the county are very close to being harvested. Right now, Gutierrez said his office has been sampling fields to make sure none of the plants are testing at THC levels higher than 0.03%.

Gutierrez said there have not been any problems and all the lab results have met the requirements.

Robinson said if a test were to come out between 0.03%-1%, the grower would have a chance to test again. If the results still come back too high, the plants would have to be destroyed within 45 days.

If the results came back with over 1% THC, he said the plants would have to be destroyed within 48 hours.

Gutierrez foresees the hemp industry growing in Kings County, with bigger farmers possibly getting involved. He said he already receives several calls a day about hemp.

“I anticipate the acres to increase next year,” Gutierrez said.

The hemp plant has a 90-day maturity rate, so theoretically, growers could have multiple harvests in one season (April-October).

The Meyers said they know the hemp industry will have to deal with a stigma for a few years, especially because people always correlate hemp with marijuana even though they are two different things.

Charles Meyer said it bugs him when people, including the public, condemn hemp because of its small relation to marijuana.

Charles Meyer said there are still people who are scared to have hemp in their neighborhoods, saying it would bring bad people into the community.

“Their claims are based on pure ignorance and panic,” he said. “I would not produce something that was detrimental to the public.”

While there may be a few “outlaw” farmers, Charles Meyer said farmers are law-abiding citizens.

“A real farmer would not grow marijuana,” he said.

Charlie Meyer said California, and especially the Central Valley, have ideal conditions to grow hemp, including the soil, water and climate. He said the area is unique due to the lack of humidity, which reduces mold and pest issues.

Thousands of products can be made from every part of the hemp plant, from the flower to the stalks to even the roots. New products are being developed every day, from food to CBD oil that reduces inflammation to even construction products.

“So you wouldn’t have that mess out in the ocean if they were making the plastic from hemp,” Charles Meyer said.

Because there are so many different varieties of hemp and different products to grow it for, the Meyers are on their way to figuring out how to grow it year-round.

The last thing that the Meyers would like to let the public know is that the hemp fields, while they do have a faint odor, give off nothing like the well-known “skunk” smell of marijuana.

Charlie Meyer said if anyone is a friend of a hemp farmer, he encourages them to ask about the plant, smell it or research it to learn more about it.

Along with changing public perception, Charles Meyer said the biggest challenge for the hemp industry is still the government. He said the government is trying to come up with rules and regulation to keep control under its thumb.

While hemp is supposed to be treated like any other crop, Charles Meyer said it’s been tough to convince that to the California legislature, law enforcement and even banks.

According to Charles Meyer, marijuana growers have told him that the current standard for THC levels in marijuana is around 23%. So even though hemp would never be sold as marijuana, the feds said anything above 0.03% is considered marijuana.

Charles Meyer said he hopes to get the rules and regulations changed to possibly anything up to 1% THC is considered hemp.

Charles Meyer has also formed a hemp grower’s co-op. He said he would like to have a research and development lab where they can explore any and all possible products that could be made from hemp.

“You can’t change history, but hopefully we can be influential for the future,” Charles Meyer said.

Get the latest local news from your community delivered directly to your inbox! 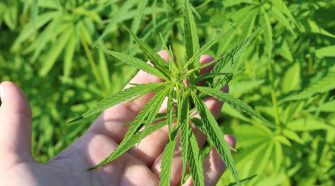