The Kentucky House Health and Family Services Committee has unanimously passed a bill to establish labeling requirements for CBD, according to a Hemp Grower report. The measure would license CBD companies as food or cosmetics manufacturers.

The labeling for both ingestible and cosmetic CBD products would require that consumers are able to find the certificate of analysis for the product, including where the hemp was grown and contact information for a manufacturer or distributor. The labeling law would also prevent CBD products from making any health claims.

The House Agriculture Committee is considering another bill that would legalize hemp cigarettes in the state by removing combustible hemp from the state’s Controlled Substances list.

State Rep. Mark Hart, the Republican co-sponsor of the bill, told WKMS that removing the ban on combustible hemp would provide more market opportunities for the crop.

“Everybody is growing this hemp, and they don’t seem to have an avenue or a way to market it, sell it and make money off of it. And when you see other states doing some of the stuff, and their hemp farmers are surviving and thriving, I want Kentucky hemp farmers to have the same opportunity.” – Hart to WKMS

Ending the ban on combustible hemp is opposed by the Kentucky Sheriffs’ Association who believe it would add to the confusion that already exists for law enforcement around legal hemp and illicit THC-rich cannabis.

Katie Moyer, founder of Kentucky Hemp Works and member of the state Industrial Hemp Advisory Board, said that the current ban on smokeable hemp has failed since those products are already “sold in gas stations and corner stores from Fulton County to Pike County.”

The hemp-related laws come three months after state Agricultural Commissioner Ryan Quarles sent a letter to the federal Food and Drug Administration urging them to “develop a model regulatory framework for oversight of the processing of hemp and manufacturing of Cannabidiol (CBD) which will protect public health, comply with federal law, and foster growth in the industry.”

Last year, there were more than 1,000 cultivators and more than 200 hemp processors in the state. 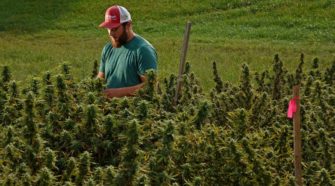