The distinctive smell of hemp now wafts through certain test plots at multiple K-State Research and Extension sites across Kansas.

The end goal is to find out whether it’s also the smell of money for farmers seeking a valuable new rotational crop.

K-State researchers are seeking answers to many questions, including whether to grow hemp for grain, fiber or CBD (cannabidiol) oil. One can hardly look at a drugstore shelf without seeing CBD as an ingredient in a wide range of products based on its reported health value.

“Right now, the revenue generation is definitely in CBD production, so that’s getting a lot of excitement,” said Jason Griffin, director of the John C. Pair Horticulture Center. But growing hemp for grain, fiber or both, through dual-purpose production, offers what Griffin calls a mind-boggling variety of options.

While some people might think of hemp only in terms of rope, Griffin said hemp uses have expanded far beyond mere ropes. From paper products to flooring materials and even hempcrete concrete reinforced with hemp fiber to strengthen it – “the uses for industrial hemp are almost limited only by the imagination,” he said.

With all those uses, it’s easy for people to get excited about the prospects of growing hemp.

But Griffin recommends caution. “It’s going be an alternative crop to work in with your corn or with your wheat, where you can seed — maybe apply some irrigation, maybe not — but that’s part of the reason we’re doing research to see if dryland industrial hemp will produce as well as irrigated.

“But it is certainly an option for Kansas farmers in the future, for adding a different crop to their rotation.”

K-State Research and Extension is testing several different production techniques, fertilizer treatments, and looking for pests and diseases. In many cases, the test crops are modeled on what Colorado growers have done, including using trellis supports.

The Pair Center is testing 17 different varieties, while the Olathe center planted one variety to observe how multiple environments affect growth.

At both sites, it’s easy to see the plants grown in high tunnels are much more robust than those in open-air beds, but the researchers are seeking far more data points than the “eyeball test.”

Growing well for various end uses is an obvious concern, but another is making sure the plants remain legal and don’t have to be destroyed according to United States drug control laws.

Different kinds of cannabis plants have different uses depending on how much of the chemical compound THC is present. Marijuana has significant levels of THC, which is what produces a high. Industrial hemp, on the other hand, is low in THC, which allows for its myriad of uses.

It’s all closely controlled: When test programs launched this year, researchers and independent growers in Kansas had to be licensed by the Kansas Department of Agriculture, which included undergoing a criminal background check and making their fingerprints accessible to the FBI.

The 2018 Farm Bill made all of this possible. Industrial hemp now can be grown in pilot programs under the U.S. Department of Agriculture and state departments of agriculture.

Noting that K-State scientists are in the infancy of experimentation with the crop, Griffin said they are rapidly gaining time- and cost-saving experience “so that we can get that information out there for the farmers, for the growers who want to grow this, so that they can learn from our mistakes.

“We can make mistakes and give them the good information to let them go forward and grow a healthy crop and let us fail, but the farmers succeed, if that’s what it comes down to.” 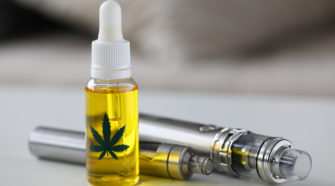 CBD Vaping: Why So Many People Have Started