In a time marked by shuttered business, depressed consumer shopping, and plunging retail spending, not many markets can claim the victory that the CBD (cannabidiol) market has done so far. Back in 2018, sales of CBD products in the United States alone harvested a generous $600 million-$2 billion. Sales of CBD have actually grown slightly from those impressive numbers in 2019, as more consumer concerned about their health have switched their shopping habits, and now buy full-spectrum CBD online directly from the manufacturers. This is according to a report published by Forbes, which also foresees the figure inflating upwards of $16 billion by 2025.

As a cannabis-derived compound that harbors numerous pharmacological actions, such as antiemetic, anti-inflammatory, anxiolytic and antipsychotic properties, it is understandable why the market has such promising prospects.

While emerging research is highlighting the benefits of this non-psychotropic cannabinoid, a handful of studies have also spotlighted how CBD lacks the non-toxic properties to cause negative changes on food intake, blood pressure, body temperature, heart rate, gastrointestinal transit, psychomotor and psychological functions.

But just how safe is it and should you be wary of introducing CBD into your lifestyle? Read on to find out.

CBD Research Has Been Suffocated by Classification Standards

Due to the Drug Enforcement Administration (DEA) classifying the cannabis plant as an illegal substance since the 1970s, strict restrictions have been imposed on CBD research for the past decade. Anyone who wishes to study the plant-derived compound is welcome to do so, buy only if they have obtained the necessary license.

Just one CBD-containing compound has been approved by the Food and Drug Administration (FDA) so far – GW Pharmaceuticals’ drug Epidiolex. Studies on children who suffer from two rare types of epilepsy have demonstrated a major reduction in seizures after consuming CBD.

On the other hand, trials of this kind have also shown that CBD may cause an adverse reaction in some patients; many endured sleep disturbances, higher infection rates and lower appetite. Nonetheless, since it cannot produce the same high associated with THC (tetrahydrocannabinol), CBD is not considered to be a habit-forming substance.

The FDA is Drawing Attention to CBD’s Lack of Regulation

In November 2019, the FDA issued warning letters to 15 companies who had been marketing their CBD products illegally. Soon after, a Consumer Update was issued spotlighting the FDA’s specific concerns about CBD products; especially edible products that are labeled as “food”.

“[The FDA] recognizes the significant public interest in cannabis and cannabis-derived compounds, particularly CBD. However, there are many unanswered questions about the science, safety, and quality of products containing CBD,” reads a statement from the Agency, which said in a recent update that the cannabinoid may interact negatively with other drugs and cause liver injury and drowsiness.

This leaves many people to wonder what products are actually safe. Plus, with the FDA confirming that the vast majority of CBD products are unregulated and untested in the U.S., buyers ought to proceed with caution before snapping up the first deal they find.

Also noted by the FDA was how its product analysis showed that some products don’t clearly label their contents on the label; many are laden with pesticides, toxic metals and THC. In order to avoid this, the Agency says that buyers should always ask to view independent lab tests from sellers with a professional image and polished reputation.

You Cannot Overdose on Cannabis

Cannabis has been used for centuries with no reported overdose or toxicity cases. However, since the naturally-occurring compound is derived from the cannabis plant, it has been tarnished with a negative reputation for years. Thankfully, as the legal status of cannabis has changed – it is now legal in 33 U.S. states for medical purposes and another 11 for recreational purposes – so has the opinion that people have of it.

Experiments on CBD tolerance have delivered positive insights, with the World Health Organization (WHO) confirming that chronic consumption of high doses in the range of 1,500 mg/day “is generally well tolerated with a good safety profile.”

This hypothesis has not been agreed on in other studies, however. CBD has indicated that it may cause some side effects, such as reduced fertilization capacity, changes in vitro cell viability, inhibition of hepatic drug metabolism and impacted activities of the body’s drug transporters, such as p-glycoprotein – responsible for clearing foreign substances out of cells.

Existing Research to Prove the Safety and Efficacy of CBD

CBD is well-tolerated and has a good safety profile, according to the World Health Organization (WHO). This is the same organization that touted CBD oil as a therapeutic aid for the following conditions (all of which have been hyperlinked with studies confirming their capabilities 🙂

Alzheimer’s disease – This study showed that cannabis compounds can eradicate toxic Alzheimer’s proteins from the brain.Parkinson’s Disease (PD) – Scientists that have delved into the benefits of cannabis for Parkinson’s disease determined that the plant may help minimize motor symptoms in PD patients, with more research needed to determine minimum effective dosage for results.Multiple sclerosis (MS) – According to researchers that published study results in the journal Multiple Sclerosis and Related Disorders, cannabinoids can bind to receptors in human cells and influence their behaviors to minimize MS symptoms.Huntington’s disease – Patients who struggle with this inherited condition may turn to anti-depressants, anti-anxiety and anti-seizure medication; all of which can have negative side effects. Thankfully, medical cannabis is naturally abundant in these properties.Pain – In clinical trials on patients who suffer from chronic pain, cannabis has been successfully employed to ease pain thanks to its action on CB1 and CB2 receptors in the endocannabinoid system (ECS).Psychosis – Cannabis has long been deemed a “gateway drug” with the potential to trigger psychosis. However, experts say the non-psychotropic compound CBD can minimize episodes of psychosis.Nausea – Some of the cannabis plant’s powerful nausea-combatting cannabinoids exert an anti-emetic across a wide variety of animals vomit after exposure to toxic chemicals, according to this study.Inflammatory diseases – The anti-inflammatory properties of cannabis were highlighted in this 2015 review published in Bioorganic and Medicinal Chemistry; cannabis’ non-psychoactive compound CBD managed to ease inflammation through various pathways in the body.Rheumatoid arthritis – Based on an article published in the Journal of Neuroimmunology, cannabis may be an effective treatment for rheumatoid arthritis.Infection – An investigation by researchers from the Centre for Superbug Solutions at the Institute for Molecular Bioscience at the University of Queensland in Australia showed that CBD is capable of fighting infections, such as streptococcus, only to discover that it killed bacteria within just hours; faster than conventional antibiotics, like daptomycin and vancomycin.Inflammatory bowel disease (IBD) – The symptoms of IBD can be reduced with cannabis consumption, based on this study. What researchers gleaned from their findings was that 91% of patients reported improved IBD symptoms after cannabis use; 83.9% experienced abdominal pain relief, 76.8% reportedly had improvements in abdominal cramping, 48.2% had less joint pain, and 28.6% didn’t suffer from diarrhea.Diabetic complications –  Cannabis has been reported to release protective effects in multiple disease models, such as diabetes and diabetic complications. With diabetes being a major co-morbidity for other diseases and health concerns, more research and clinical study is needed to determine the exact mechanism responsible for the beneficial effects observed in this study.Precautionary Measures to Consider When Using CBD

The dosage of CBD that you consume will influence how it makes you feel, and every user is different. For example, many individual CBD users notice that higher doses may serve as a stimulant, whereas lower doses may cause you to feel slightly mellow; as the cannabinoid exerts anxiolytic effects. Keep in mind that alcohol and various other central nervous system depressants can boost the sedation effects of CBD. For this reason, it is wise that you communicate openly with your doctor before combining other medications with CBD.

Another thing to consider when consuming CBD safely is whether or not the label transparently reflects what is inside the product you buy. A recent study analyzing 84 CBD products revealed that over a quarter were lacking the amount of CBD featured on the label. Furthermore, a levels that exceeded 0.3 % – the legal threshold – of THC was discovered in 18 of the products. Requesting to view third-party lab tests and any relevant licenses/certification from a CBD supplier will assist you in steering clear of dishonest sellers.

Finally, you ought to pay some thought to the potential side effects of CBD, including mood changes, reduced appetite, diarrhea/digestive issues, agitation and irritability. To avoid potential side effects, the recommended starting dosage is 2.5 milligrams per kilogram of body weight (mg/kg) twice daily. However, since all other CBD-containing products except Epidiolex are outside of direct FDA regulations, official dosage guidelines do not currently exist. With that being said, you should work slowly and build your way up to assess your tolerance.

Get Real-Time Updates from MJobserver.com

Next CBD and THC – What are they and how do they affect your health? 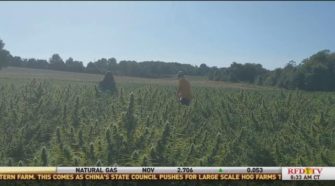