Industrial hemp is a cousin to marijuana, but growing hemp is now legal in Texas. That in mind, the Texas Farm Bureau will host a forum Wednesday in Waco for anyone who may want to dirty their hands on a budding cash crop.

Growers, ag officials and even activists wanting to legalize marijuana in Texas are welcome to fill seats at the hearing, which will start at 9 a.m. in Texas Farm Bureau’s Conference and Training Center on State Highway 6, near Ridgewood Country Club and the Twin Bridges over Lake Waco. Texas Agriculture Commissioner Sid Miller will serve as master of ceremonies.

At issue is drawing up rules for growing hemp in Texas, something Gov. Greg Abbott made legal in June 2019 when he signed into law a bill that allows for the production, manufacture, retail sale and inspection of industrial hemp crops. Hemp-derived CBD products already have become widely used by consumers in search of pain relief and treatment of other health-related maladies. The compound is available in creams and capsules in retail outlets ranging from H-E-B and Walmart to Connor Health Foods on North Valley Mills Drive and Your CBD Store in Hewitt, which opened last year.

“I talk with people who have all kinds of stories about CBD and how it relieves their pain,” Connor Health Foods part-owner Nick Connor said.

Connor said he was pleased to hear about the forum on hemp production planned in Waco. He said he secures his product from a Washington-based supplier of health and nutritional products, Barlean’s, which dispenses a hemp oil produced at Colorado State University.

“It’s not anywhere close to being my biggest seller, but it does account for 2% to 3% of my sales,” Connor said.

The availability and popularity of CBD-infused products is so pronounced they are hitting shelves everywhere, he said.

Which is why Texas agriculture wants a piece of the action.

Still, a federally mandated protocol must be followed.

A state plan to monitor and regulate the production of hemp must be approved by the United States Department of Agriculture before the state can issue licenses to grow hemp. Wednesday’s public hearing in Waco is part of that process, said Brant Wilbourn, the farm bureau’s associate director of commodity and regulatory activities.

Proposed rules were published Jan. 10 in the Texas Register, the journal of state agency rulemaking. Comments on the rules, including those at Wednesday’s meeting, are due to the state by Feb. 10. The USDA, meanwhile, has its own comment period that closes Jan. 29.

The state now allows cannabis with a THC level of less than 0.3% to be legally grown. Cannabis that exceeds that concentration is considered marijuana, which remains illegal. THC is the primary psychoactive compound in cannabis.

“One issue we’re watching is the timeline between when regulators visit a farm to collect samples of the crop for THC levels and harvest,” Wilbourn said in a press release on hemp production. “Fifteen days really isn’t workable. A lot can happen in a week in Texas weather.”

That 15-day mention refers to an interim USDA rule still in play.

“If there is something in the rules you don’t think is workable, come make the case,” Wilbourn said by phone. “The Department of Agriculture will consider that when finalizing and adopting rules for the hemp program.”

Central Texas farmers have not been “beating down the door” in pursuit of hemp-growing licenses, he said when asked about the pace of inquiries.

“It’s just now becoming legal, so I would expect growing pains, and there will be discussion of where in the state it would be best suited to plant,” Wilbourn said. “We as an organization do support the production and cultivation of hemp, and we pushed for passage of House Bill 1325 in the last session of the Legislature. We see it as another opportunity for our farmer members to grow something in pursuit of a profit, which has been elusive with the way the current agricultural economy is going.”

Calvin Trostle, a Lubbock-based agronomist with the Texas A&M Agrilife Extension Service with expertise in row crops, peanuts and alfalfa, said hemp is creating a buzz from El Paso to East Texas and the Gulf Coast to the High Plains. He said that is significant because the various regions of the state have their own growing seasons and planting peculiarities that will come into play when growers consider how to maximize hemp crops.

“The most recent word I’ve heard is the state may begin reviewing applications mid-March,” Trostle said. “That being the case, growers in the southern third of Texas will be beyond their optimum planting window by the time they have licenses in hand.”

Another concern is Texas Department of Agriculture staffing, he said.

“If they get thousands of applications, will they have the staff to handle those quickly? Are they equipped to handle the program?” he said. “Anyone with a felony conviction is not eligible for a license. Will background checks be required? Is that going to be a bump in the road for a few people? A lot of farmers in Texas rely heavily upon crop insurance. Will you need a signed contract with a buyer to get it? What about processing? Someone running such a facility is going to need evidence there will be a crop to buy. They may want a letter of credit showing the grower is financed well enough to pursue the matter. Then when I get my license, there are concerns about getting good quality seeds or planting stock. Texas Department of Agriculture rules say I cannot bring in clones or transplants from out of state.”

Trostle agreed that hemp-related products have a following. They have been used to treat seizures, insomnia and aching joints.

“In my opinion, they are kind of pricey,” he said. “The claims, the testimonials, how much is real and how much is fad? Quite a few people have tried it as a novelty, but I don’t know if they will continue using it if they do not notice a difference in their symptoms. This is a product not regulated by the Food and Drug Administration. Do we need more research?”

Trostle said hemp is a versatile product, its use applicable to car interiors, wallboard, fire-resistant building blocks, even work clothes. But he said the law of supply and demand is kicking yield prices in the teeth.

Per-acre revenue has been declining as more than 40 other states have legalized hemp production as Texas considered the matter.

“At some point you may have to say, ‘It doesn’t look like the economics are here.'” Trostle said. “No matter how much they may want to get involved, I hope they follow their gut. You may want to back off.”

Texas Department of Agriculture spokesman Mark Loeffler said the office is preparing for 50 to 200 people to participate in Wednesday’s meeting.

“We know this has become a topic of conversation and is all over social media,” Loeffler said.

Ag Commissioner Miller and his office have endorsed hemp growing in Texas, but advised participants to enter the market with eyes wide open.

“Be aware of the ‘hemp hype’ and use common sense before you plant,” Loeffler said. “Tell a farmer he can make a profit on something, and he may plant the world level with it. We’re just urging caution.”

At least one person in attendance Wednesday will be a representative of the Houston-based Texas Hemp Harvesters Association. Founder and executive director Hannah Wilner said the organization is interested in marketing hemp-related products, supporting farmers in accessing buyers and including industrial hemp in economic development.

Another group planning to send a representative to Waco, the Texas Hemp Cooperative, has been touring the state to spread the word about growing hemp and encouraging farmers to get involved. The cooperative hopes to open facilities in Central and South Texas, and continues to gauge the interest of area farmers, spokesman Rudy Montes said.

It has scheduled its own forum for interested growers from 10 a.m. to 2 p.m. Saturday at West Community Center, 200 Tokio Road. Publicity material provided by the organization states State Rep. Kyle Kacal, a Republican and rancher from College Station whose District 12 includes McLennan County, will serve as featured speaker. The public is invited.

Next Our view: Nation’s hemp rush worth a cautious try by South Jersey farmers - Press of Atlantic City 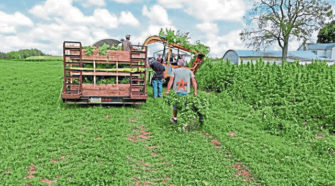