CHIPPEWA FALLS — As Haleigh Ortmeier-Clarke looked out at a field of industrial hemp in Chippewa Falls on Aug. 20, she was impressed with how evenly the crop has grown.

Fifteen varieties of industrial hemp were grown this year on a test site of county-owned farmland near Lake Wissota, a few blocks east of HSHS St. Joseph’s Hospital. The crop was planted June 11 on a two-acre parcel, and it will be harvested in the next 10 to 15 days, she said.

“We’re looking at what is the best option for growers,” Ortmeier-Clarke said. “This has been a learning year. We’re looking at everything we can to make this crop more valuable to farmers.”

Ortmeier-Clarke is a graduate research assistant at UW-Madison College of Agricultural and Life Sciences and the Division of Extension. Industrial hemp is now legal in Wisconsin, and about 40 people attended a seminar at the field site Aug. 20 to listen to Ortmeier-Clarke and other researchers discuss their findings on how the crop is growing in Wisconsin. She explained that there are three different possible products from hemp: the fiber/stalks, the seeds in the flower and oils. Farmers would choose industrial hemp varieties based on which product they want to harvest.

The fiber-rich industrial hemp varieties are growing tall, with some plants topping six feet, looking more like a corn stalk than like a marijuana plant.

“This is good for fiber product, with the thick stalk,” Ortmeier-Clarke said as she examined those varieties. “If you want fiber, you want that tall plant.”

In comparison, the hemp plants that produce more oils are shorter and fatter, looking more like a poinsettia or a marijuana plant.

The state acquired its industrial hemp seeds from a producer in Kentucky. However, it has been more than 70 years since the crop could be legally grown in Wisconsin, so there isn’t a lot of data on which varieties will thrive in the state’s climate. Ortmeier-Clarke said that is exactly what drew her to joining this study.

“This is a unique opportunity to look at a crop that is new to Wisconsin again,” she said.

Ortmeier-Clarke said it is too early to tell if industrial hemp will be a hearty crop.

“It was a really rainy year; it’s been an odd year for any crop,” she said.

Bryan Jensen, another UW-Madison researcher, told the crowd about some insect problems they have seen with industrial hemp, particularly a bore that digs into the hemp stalk. However, there wasn’t significant damage.

“You can withstand some insect pressure in these fields,” Jensen said.

It is too early to tell what types of insecticides will be available in the near future to fight those bores and other insects, he added.

Jensen was pleased with the conditions of the hemp field in Chippewa Falls.

Jensen cautioned that there still isn’t a strong market for industrial hemp, but more Wisconsin farmers are considering growing it.

“There was a big jump in hemp from last year to this year,” Jensen said. “It’s a crop that seems to be hanging in there.”

Carl Duley, Buffalo County UW-Extension agriculture agent, also has an industrial hemp test field in his county. The Chippewa Falls site is among four trial field sites across the state.

“It looks different than ours,” Duley said of the Chippewa Falls’ crop. “It’s not as tall as we have.”

Duley said he’s intrigued by all the possible products that can be manufactured from industrial hemp.

“I’m interested in the fiber and the seed, more than the oils,” Duley said. “I see a lot of future for the fiber.”

Duley told the crowd that industrial hemp could be susceptible to the same type of mildew problems that affect hops plants, but so far, it hasn’t appeared in any of their test fields.

“Hopefully we won’t see any of it,” Duley said.

Wisconsin was once a leading producer of industrial hemp, primarily for rope production, until it was prohibited in 1938. The Legislature reclassified industrial hemp from a narcotic to a commodity crop in December, making it legal to grow at both the state and federal level.

The hemp is doing well in the sandier soils at the Chippewa Falls site, he added.

“We’ve scattered these around the state to have varied soil,” Clark said.

The state law requires that any industrial hemp must remain below 0.3 percent of THC potency, and Ortmeier-Clarke is confident that the plants are below that level. If the crop reaches the THC level, it must be destroyed. 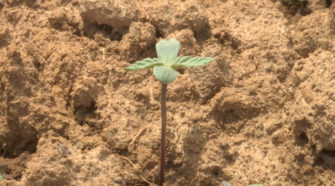 AAMU growing industrial hemp to use for auto manufacturing – rocketcitynow.com