A duck test is a form of abductive reasoning, a “logical inference which starts with an observation or set of observations then seeks to find the simplest and most likely explanation.”

From the above video, most readers will notice the creature looks like a duck, it most certainly swims like a duck and quacks like a duck. We could then conclude with a reasonable margin of confidence that it is, in fact, a duck.

Such a test can be adapted and applied to a range of animals and in the context of an article for an investing website, a publicly-listed cannabis company. Aurora Cannabis (ACB) describes itself as a “Canadian medical marijuana producer” that also services the adult consumer-use market. The company also lists the range of cannabis strains it grows and harvests in its indoor farming facilities.

A Brief Primer On Farming

A farm is traditionally defined as an “area of land, together with a house and buildings, used for growing crops and/or keeping animals as a business.”

The practice, which dates back to the Neolithic era, can roughly be divided into subsistence and commercial farming. A farmer in the former focuses on growing enough produce for themselves and their entire families. While a farmer in the latter focuses on growing crops and selling at a price greater than the aggregate costs of production. Aurora, obviously, falls into the latter, to an extent, an individual growing their own cannabis plant for self-medication falls into the former. There is quite a range of high tech products for this such as Seedo, a set it and forget it hydroponics grower.

Farming has been developed over centuries through technology-induced iterations spurned by research and development. The green revolution which occurred between 1950 and the late 1960s radically transformed agricultural productivity, allowing Earth’s limited resources to provide for even more people than ever before. This aligned with the theory of agricultural intensification posited by Ester Boserup, the Danish and French economist. In this, “necessity is the mother of invention,” hence, an increase in human population would stimulate technologists to increase agriculture yields.

Using vine crops as a point of comparison, indoor farming has a significantly higher yield than outdoor farming. However, this is countered by higher costs of production from electricity demands, more specialist employees, and the daily monitoring of water, nutrients, and pH levels.

Before I detail why Aurora is fundamentally a farmer trading at a valuation that would make some of the fastest growing Silicon Valley SaaS stocks jealous, it is imperative to frame this detail with the counter-argument to why it is not a farmer. Indeed, someone might disagree with my conclusion that the winged creature in the above video is a duck. They might argue that while it looks and sounds like a duck, it swims like a swan. Hence, there is no reasonable margin of confidence to conclude that it is, in fact, a duck.

Edible cannabis products are displayed at a dispensary in Las Vegas (Source: “Why it will be another year before cannabis edibles come on the market“)

This is the fundamental rebuttal of Aurora’s status as a farmer, and it is absolutely true in principle. As a form of absolute necessity, Aurora has to move away from the raw agricultural commodity to more value-add agricultural products. Oregon State University defines this as a process that changes a “raw agricultural product into something new through packaging, processing, cooling, drying, extracting, or any other type of process that differentiates the product from the original raw commodity.” However, Aurora’s realization of this future is dependent on a number of factors. The most significant of which will be explored.

This shift in consumer taste to cannabis edibles will happen at a substantial rate within the next five years.

Cannabis edibles, or cannabis-infused foods, are food products that contain THC. Hence, it could range from chocolate bars and ice cream to baked goods like cookies, brownies, and cake. There is even cannabis-infused butter which opens up the cannabis infusion process to fried foods. Hence, cannabis-infused scrambled eggs could very well become the next foodie craze.

Besides the fact that such products by themselves are barely enough to warrant a premium valuation, the market for cannabis edibles in Canada remains pre-nascent. The Canadian government is working towards October of 2019 for the legalization of cannabis edibles. Hence, it is entirely prudent to state that as a matter of fundamental fact, Aurora Cannabis will remain a farmer for the next year.

However, the stock market, and especially cannabis stocks are a lot more forward-looking that one year. Hence, it is important to model Aurora’s revenue composition over the next 5 years to 2023. The conclusion from the model takes a view Aurora is a farmer as long as it continues to realize a revenue composition where sales of dried cannabis flower remain the most significant of its product categories.

However, there is a strong appetite from Canadians for cannabis-infused foods. Deloitte’s 2018 cannabis report states that nearly 64 percent ofcurrent and likely consumers are aware of cannabis-based baked goods, such as brownies, and 51 percent say they’re interested in trying them.

Source: Deloitte “A society in transition, an industry ready to bloom“

As a comment on my previous article stated, there is a trend towards cannabis derivatives like edibles being a major part of the industry. But this presents a further dilemma for Aurora longs. Firstly, there is no guarantee Aurora will create or own the ‘flagship’ cannabis edibles brand. Also, other derivatives like cannabis oil have also seen a collapse in average net selling price. Aurora’s fourth quarter 2018 results saw this product category decline by 25% year-over-year. Hence, while a ‘value-add’ product, cannabis oils under the Canadian legalization regime seems to be trending towards commoditization.

The above chart from Headset gives a hint on how Aurora’s revenue composition might look like over the next five years. California, Colorado, Nevada, and Washington all still see the largest constituent of cannabis sales coming from dried cannabis flower. Colorado, which is four years mature, still realized 40% of sales from dried cannabis flower. Hence, it would be prudent to state that there is no reason for Canada, and subsequently Aurora, to buck this trend.

Five years from now, Aurora will still see dried cannabis flower, described as ‘farm revenue’ on the model remain the most significant contributor to its sales. The second largest contributor will likely be cannabis oil. This is already precipitously moving towards a low-value commoditized cannabis farming derivative.

Risks To The Emergence Of The Canadian Cannabis Edibles Market

The timeline for the legalization of cannabis edible has a very high likelihood of being pushed back beyond the October 2019 target. Indeed, the next Canadian general elections take place next year, and as such, relevant ministers from the Liberal party could be more apprehensive at pushing through what some consider the more controversial aspect of their cannabis legalization. Further, there is also a risk from the Conservative Party of Canada being elected. And while it is unlikely they roll back cannabis legalization in its entirely as suggested by some media outlets, they will likely take a stand against the legalization of cannabis edibles. This, as well as a legalization regime that is extremely reserved in its support of branding, is a substantial risk not being considered by longs.

This answer to this question poses materially diverging implications for the future of Aurora. A pharmaceutical company “discovers, develops, produces, and markets drugs for use as medications.” Some might be aware of Cambridge, England based GW Pharmaceuticals (NASDAQ:GWPH), largely thought to be a leader in the space.

GW’s flagship Epidiolex, a cannabinoid medication for childhood epilepsy, could help the company realize sales of $1B by 2026. The drug has taken years and a huge amount of capital to develop. Pharmaceutical companies are also valued for the market potential of their drugs pipeline, hence will experience substantial volatility in the clinical trial process of their drug development.

Aurora’s acquisitions to date have not given it a foothold in this sector. For example, MedReleaf (OTCPK:MEDFF), which is described as a pharmaceutical company, derives its revenue from selling farmed cannabis flower and could be described at this inhabiting the ‘pre-drug’ discovery part of the drug development process. A tepid comparison would be a millennial investor describing himself as a millionaire because he just funded his Robinhood account with a few hundred dollars. Aurora has the potential to be a pharmaceutical company, but it currently exists in a zone where it is not one.

Further, I express a strong level of skepticism at bullish calls that Aurora will simultaneously be a vertically integrated cannabis retailer, a hedge fund, and a pharmaceutical and consumer staples company.

excerpt from a book on identifying ducks

For some Aurora longs, the realizations from this article might be a shock, almost like procrastinating students receiving their results at the end of an academic term. For some, their internal bias, also known as ignorance, will ramp up, while others might appropriate the 2017 word of the year, to describe the analysis put forward in this article.

However, the points posited in this article are rooted in empirical data or extrapolations of such. Aurora is a farmer, the company passes the ‘farm test’. Fundamentally, having a modern indoor farm does not make a company any less of a farmer than a fisherman using an electric fishing reel is not a fisherman.

When investors in the space become increasingly aware of this, I would expect valuations of companies in the space to trend towards the valuation one would expect a farmer to trade at. The global agriculture industry is extremely competitive, hence any substantial margin for a crop like cannabis would be competed away at ease by new farms coming online.

With the largest constituent of Aurora’s revenue for the next five years coming directly from what will increasingly become a low margin farmed commodity, the company’s future is bleak. I would expect the long-term P/S for any such company to be between 2 and 4. Hence, when the legalization induced growth has stabilized, the growth premium will dissipate, and the company’s valuation will likely trade down.

Disclosure: I am/we are short TLRY.

I wrote this article myself, and it expresses my own opinions. I am not receiving compensation for it (other than from Seeking Alpha). I have no business relationship with any company whose stock is mentioned in this article.

Next Guggenheim's Takeaways From The Capital And Cannabis Conference 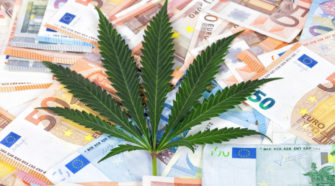 Banking and Hemp: The Effect of the New Farm Act – Green Market Report