This week, national survey data compiled by Gallup revealed that 66 percent of U.S. adults support cannabis legalization, which is the highest percentage ever reported by Gallup. Meanwhile, the FDA is accepting public comments until Oct. 31 on whether marijuana should be reclassified under global drug treaties.

Here, we’ve rounded up the 10 headlines you need to know before this week is over.

Federal: The FDA is currently accepting public comments on whether cannabis should be reclassified under global drug treaties. The request, posted Oct. 10, asks for comments on abuse potential, actual abuse, medical usefulness, trafficking and the impact of scheduling changes on availability for medical use for marijuana and 15 other substances. Read more

Sixty-six percent of U.S. adults believe that “the use of marijuana should be made legal,” according to national survey data compiled by Gallup. The percentage is the highest ever reported by Gallup, which has been tracking Americans’ views on the subject of marijuana legalization since 1969. Read more

North Dakota: A poll released Oct. 21 by Legalize ND shows that 51 percent of North Dakotans support legalizing recreational marijuana with 36 percent opposed, which signifies a five-percent increase in support from the group’s last poll in May. However, opponents dispute the poll and announced late last week that the list of state organizations opposing the measure continues to grow. Read more

California: California moved a step closer to allowing marijuana deliveries in communities that have banned retail sales of the drug as regulators rebuffed cities and police chiefs who are opposed to the rule. The proposal is a major issue that could ultimately end up in court as the state continues to set myriad rules for how cannabis is grown, tested, packaged and delivered since recreational sales became legal Jan. 1. Read more

Massachusetts: Two Canadian firms are moving into the Massachusetts marijuana business, with deals to acquire two local medicinal marijuana companies that already have been approved for recreational cannabis licensing. Milford-based Sira Naturals announced it will be acquired by Toronto-based Cannabis Strategies Acquisition Corp. Patriot Care, with locations in Boston and Lowell, while Columbia Care, parent company of Patriot Care with locations in Boston and Lowell, said in a statement that it will be doing a deal with Canaccord Genuity Growth Corp, another Toronto firm. Read more

New Jersey: New Jersey’s top Democrats in the Legislature acknowledged that they will not meet their self-imposed deadline this month to vote on a bill to legalize recreational marijuana. At least one of them says he needs Gov. Phil Murphy’s help to get the measure passed. Read more

Arizona: Arizona Attorney General Mark Brnovich on Monday withdrew his office’s argument to the Arizona Supreme Court that cannabis extracts aren’t covered under the state’s medical marijuana law. His office made a new motion that basically takes the same side of the appeal by Rodney Christopher Jones, a medical-marijuana patient convicted and imprisoned in 2014 for possessing less than one-half gram of hashish. Read more

Colorado: Marijuana sales in Colorado exceeded $1 billion as of August of this year, with tax revenue from those sales coming in at $200 million, according to a report from the Colorado Department of Revenue and its Marijuana Enforcement Division. It’s the earliest point in any of the four years Colorado has had legal recreational marijuana that combined medical and rec sales have cracked the billion-dollar mark. Read more

Ohio: The CBD oil debate continues in Ohio, where some say the state is wrong to rule the sale and use of CBD oil is illegal because it’s exempt under a federal law. The Ohio Board of Pharmacy ruled that all marijuana products, including CBD oil, can only be sold in a licensed medical marijuana dispensary, but none of those dispensaries are yet open in Ohio, so the oil is illegal for anyone to possess or sell. Read more

Utah: Democratic state lawmakers pressed Utah House Speaker Greg Hughes to explain how voters can have confidence that a medical marijuana bill will be passed if Proposition 2 fails. Hughes acknowledged that skeptics have questioned the motives of the state leaders and advocates who crafted a legislative answer to the clamor for a Utah medical marijuana program, but he assured legislators that the consensus bill was not a plot to derail this year’s cannabis ballot initiative. Read more 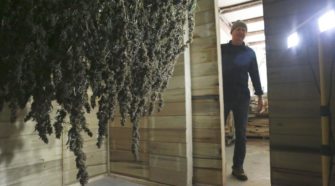