The Georgia Senate will be the next stop for a bill that sets the rules for the hemp farming industry in Georgia.

The House has voted in favor of House Bill 847, which is the key to launching hemp agribusiness in the state.

“It is now crunch time that we need to pass this to give the farmers in Georgia the opportunity to grow a new crop, if they so choose to do that,” said Rep. Tom McCall, R-Elberton, chairman of the House Agriculture & Consumer Affairs Committee. “We are not making decisions for them, but we’re giving them the opportunity to maybe grow another crop that they can make a profit on.”

HB 847, which passed the House on Thursday, 159-7, outlines the guidelines for hemp farming and production.

The Georgia Department of Agriculture (DOA) made an open call Wednesday for applications for hemp processing permits, required for receiving, processing, handling or storing hemp.

Gov. Brian Kemp signed the Georgia Hemp Farming Act in May based on the guidelines of the U.S. Agricultural Act of 2014. The act made it legal for farmers to grow the crop with up to 0.3 percent tetrahydrocannabinol concentration, a psychoactive ingredient.

HB 847 lays out the rules for licensing, permitting and testing of hemp samples. The General Assembly has been working for two years to finalize the guidelines of the industry.

The version of the bill approved Thursday would only require anyone who is transporting hemp to have a license issued from DOA. It allows colleges and universities who research the crop to use third-party contractors.

Also, if HB 847 becomes law, growers and processors can sell the product to other farmers in other states as long as they have the legal interstate authorization to do so.

“This is a request of the industry,” said Rep. John Corbett, R-Lake Park, the bill’s main sponsor. “So they can have some certainty to what they need to have.”

Hemp can be harvested as seeds, fiber or cannabidiol oil. Marijuana, which has a higher THC potency, is illegal in Georgia. 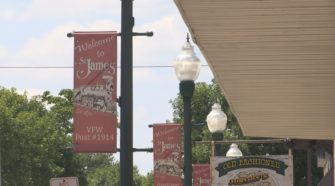