Agriculture Secretary Jeff Witte says there are about 7,000 acres dedicated to outdoor hemp production, with another 7.4 million square feet of indoor greenhouse space for growing hemp in the state. Above, Stan Bader, a farmer and owner of Las Parras de Abiquiu, has a 1-acre field of hemp. (Eddie Moore/Albuquerque Journal)

The harvest of New Mexico’s first crop of industrial hemp since legalization is well underway, and early returns show reasons for optimism and some challenges for the new industry.

The New Mexico Department of Agriculture reported Friday that it has issued 400 hemp-growing licenses since state and federal laws legalized the crop 10 months ago.

Agriculture Secretary Jeff Witte told the Journal there’s about 7,000 acres dedicated to outdoor hemp production, with another 7.4 million square feet of indoor greenhouse space – about 170 acres – for growing hemp in the state. Witte said more farmers joined the program than the department initially anticipated, including some who are new to farming entirely.

“There’s a lot of excitement about the new crop in New Mexico,” Witte said.

He said he expects only a third of the hemp grown this year to be successfully harvested.

“Even for our own grow, we had what I would consider mixed results,” Rodriguez said.

Hemp, the non-psychoactive variant of the cannabis plant, was legalized nationwide last December under the federal Farm Bill. The federal law defines hemp as cannabis with concentrations of THC, the compound most associated with getting a person high, no greater than 0.3%.

While hemp has a long history of being used in textiles, paper and other material, the modern industry is largely centered on the production of cannabidiol, an increasingly popular compound that advocates claim has curative properties.

In New Mexico, House Bill 581 passed earlier this year, establishing a statewide legal framework for the industry and farmers began applying for permits the first day they were able, Witte said.

The 400 state licenses are scattered across New Mexico, in 19 of 33 counties from Rio Arriba in the north to Doña Ana in the south. Witte said the largest grows were concentrated in southern New Mexico.

Among industry growing pains is finding an end market. Witte said federal legalization brought on a rush of new farmers all over the country, with around half a million acres dedicated to production. With so much product on the market and concerns about possible links between CBD and the recent rash of vaping injuries and fatalities, Rodriguez said, some of the hemp grown in New Mexico could end up in storage.

Consequently, Witte and Rodriguez agreed that it would be beneficial for New Mexico’s hemp industry to focus on processing and extracting oil from hemp going forward, through public or private investment.

“She is a very finicky and prissy plant,” Rodriguez said.

Ultimately, the growing pains will be a good thing for New Mexico’s hemp industry, he said.

The learning process helped growers find strains and growing techniques that will thrive in New Mexico’s climate. In fact, given the available land and direct sunlight, New Mexico could become a “major powerhouse” in hemp production, he said.

“These could be our glory years for the next decade, and I think hemp will play a part in that,” Rodriguez said. 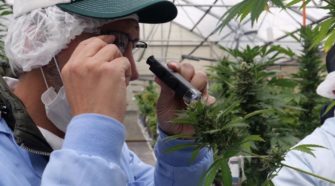