Everything you’ve heard cannabis strains is probably useless. The name of a strain itself tells you nothing about its effect, and the indica/sativa/hybrid classification is almost just as worthless. These titles for cannabis varietals arguably mean little in helping you determine how a strain of cannabis will make you feel beyond the timeworn adage that sativas offer a heady buzz, while indicas offer a full body high. That tired binary doesn’t say anything about whether you’ll feel relaxed, anxious, creative, introverted, social, or any otherway that cannabis could make you feel.

That’s because rather than judge a varietal by its indica-sativa classification, or the name of the strain itself, the only true way to quantify and qualify its effect is by analyzing its ratio of cannabinoids and terpenes – through lab tested results.

And even then, two people may have wildly different reactions to the same exact product. However, once you know what you like (or don’t like), understanding a strain’s chemical profile will help you determine how other strains with similar profiles will make you feel.

To actually discover a strain’s chemical profile, it needs to be lab tested -and depending on the cultivation method, there may be slight differences in the way the genetics express themselves, even within the scope of the “same strain.” We’ll leave it to the scientists to track those esoteric nuances.

But for the layperson, there’s an app for that. Platforms likelike Connect by Confident Cannabis, help consumers learn about cannabis strains by comprising their lab test results into a data visualization. This helpsconsumers connect the dots -literally. Some “dots” represent all the flower sold under a strain name, and together they form a “composite.” Other dots, called “private dots,” represent flower sold under a strain name by a single producer. Meanwhile, the collection of all the dots together is called a “cluster.”

Dots are positioned in a cluster according to how difficult it would be to tell flower apart based on its cannabinoids and terpenes – so the closer two dots are to one another, the more analogous their chemical profiles. Hence, if you consume flower from one dot, it’s likely to affect you similarly to flower from another, nearby dot.For instance, if you know that you like Jack Herer, then you may like a strain similar to it such as Durban Poison, Ghost Train Haze, Lemon Skunk, or Sage.

Using this sort of platform, you can look to regions of dots to find the cannabinoid and terpene profiles you’re searching for, while also learning how different brands’ versions of the same strain differ from each other. And for retailers, the platform can help show strains that are similar to others they know already sell popularly, or help them find stains that would be unique to carry within their region (if there’s a regional dearth of a particular strain profile).

“Especially for someone who’s trying to figure out what works and doesn’t, the information being presented to the cannabis consumer on what decisions to make is not useful information,” says Brad Bogus, vice president of growth and marketing for Confident Cannabis. Beyond indica and sativa, strain chemical profiles will convey more information than how they’re classified or titled on the market.

Previous Cannabis-induced psychosis on the rise in NWT prior to legalization, says health dept.

Next CBD Mulled Apple Cider: Warm Up & Slow Down During Busy Holidays 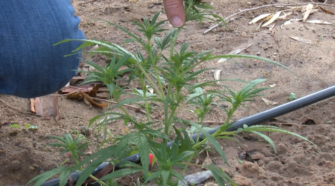