Tilrayposted its first earnings report as a publicly traded US company following Tuesday’s closing bell.
The company missed on both the top and bottom lines.
The cannabis producer became the first pot company to have an initial public offering in the US in July.
Watch Tilray trade livehere.

Cannabis producer Tilrayon Tuesday posted its firstearnings report since going public in the US. The company missed on both the top and bottom lines, sending shares down as much as 5%.

Here are the key numbers, compared to Wall Street estimates according to Bloomberg data.

“The cannabis industry remains very robust and we are pleased with our revenue momentum and strategic achievements in the third quarter,” CEO Brendan Kennedy said in a press release.

Tilray began trading on the Nasdaq in July, becoming the first cannabis company to have an initial public offering in the US. Shares were priced at $17 apiece, and rallied as much as 1,665% over the next two months, topping out in September after CEO Brendan Kennedy appeared on CNBC and laid out the growth prospects for his company.

High-flying weed stocks have caught the attention of both Main Street and Wall Street this year. The so-called “green rush” in the stockmarketcan be traced back to the middle of August when the beverage maker Constellation Brands announced a$4 billion investment in the cannabis producer Canopy Growth.

The day after Michigan voted in favor of legalization,Attorney General Jeff Sessions, a longtime opponent of legal marijuana, resigned. Tilray shares soared by as much as 30% in response to the news. But shares have since given up most of those gains after it was reported thatPresident Donald Trump was considering other marijuana opponents to fill the position.

Tilray is up 556% since going public in July. 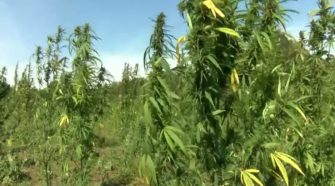