Agriculture leaders and politicians in met Monday at a warehouse outside of Murray for the ribbon-cutting of a company turning hemp into hardwood flooring. Officials believe hemp-derived wood has significant potential.

Representatives from Fibonacci LLC announced in March they were locating an 11,230 square-foot manufacturing plant to Murray, investing $5.8 million into the facility. Founder Greg Wilson claims the company is the first in the world to create hardwood flooring out of hemp. He wants to source hemp and soybean-based flooring adhesive from west Kentucky. The company this summer contracted with local farmers this summer for 800 tons of hemp stalk in Calloway, Christian and Fulton counties.

“We’re going to do as much of this as we can here. So, this plant is going to consume over a million dollars a year in raw materials. In agricultural products, in raw adhesives, for buying different things that we need as consumables here,” Wilson said.

The company uses a technology derived from the bamboo industry as well as “SmartOak” technology that uses logs otherwise converted to wood chips to create a wood product.

Congressman James Comer at the ceremony was asked to demonstrate the hydraulic press that crushes the hemp fiber into blocks. Comer said environmentally-minded, younger generations will want hemp flooring because of its sustainability.

“I think you’re going to see people with diverse ideologies that are younger, that are going to be buying more of this hemp hardwood,” Comer said. “This new generation is in to buying homes, remodeling their homes, making their homes greener and more sustainable. And this is going to be a product that’s gonna fit right in with that.”

Wilson said his startup still faces challenges in its growth, including the uncertainty over pesticides used on hemp. He said weeds make up to 20% of the company’s purchased hemp unusable for wood production.

“We need some herbicide work, and we need it quickly. We’re where we’re now with hemp where we were with soybeans in 1960,” said Tony Brannon, Dean of Murray State University’s Hutson School of Agriculture. “This is one of the more exciting opportunities, and it doesn’t involve the high cost of production that some of the CBD models are.”

Brannon said Murray State is partnering with Fibonacci to offer student internships through the newly founded Center for Agricultural Hemp.

Company officials said they plan to hire two people a month through the end of the year to operate new hydraulic presses, with the goal to have about 50 employees operating a total eight presses. But, Wilson said that expansion still won’t be able to meet potential demand.

“Our market analysis shows we’ll never be able to make enough of this to feed the market demand we have,” Wilson said. “It’s figuring out where it goes. It’s for the eco-friendly, forward- thinking people.” 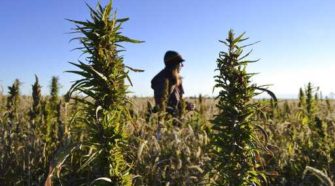