Tens of thousands of acres across the United States were licensed in 2019 for growing industrial hemp. But less than half of that total was actually harvested. The reasons why and the 2020 outlook for hemp will be discussed at the upcoming Wisconsin Agricultural Outlook Forum.

The past year’s harvest reflected the growing pains of a nascent industry. Significantly more market data and infrastructure are needed. That was underscored by a survey sent to about 10,000 growers in 19 states. There was a statistically significant number of responses, which was more than adequate to model the market. That’s according to Beau Whitney, founder of Whitney Economics of Portland, Oregon, and Clarissa Allen, a graduate student in economics at Portland State University.

Of the respondents 65 percent didn’t have a buyer for their crop, the study revealed. That was one of several significant findings that Whitney and Allen published in their study, “The Field of Dreams: An Economic Survey of the United States Hemp Cultivation Industry.” The study was published in October 2019.

Tyler Mark, an assistant professor at the University of Kentucky, said there were various reasons why the total acres harvested fell well short of the acres licensed. Growers may not have had contracts, their contracts failed before completion, or they were unable to secure seed or clones.

The lure of a huge profit potential attracted many growers. Sudden demand put great pressure on suppliers of seed and clones, Mark said. In cases where growers were able to secure seed, germination was disappointing. Grower experiences with seed reveals a need for certified-seed programs. The American Seed Trade Association has published guidelines for best-management practices for hemp-seed production.

Many growers expressed concerns about timely collection of samples for tetrahydrocannabinol testing. Some were concerned inspectors wouldn’t make it to their farms before their crop went “hot.” The longer a hemp crop remains in the ground, the more likely its tetrahydrocannabinol level can exceed the threshold. If a crop exceeds a mandated 0.3 percent threshold it must be destroyed.

The threshold is an arbitrary level, said Paul Mitchell, an agricultural economist and director of the Renk Agribusiness Institute at the University of Wisconsin-Madison. Longer term there may be a way of breeding hemp varieties to reduce tetrahydrocannabinol levels.

Mitchell added that the year’s persistent wet weather adversely affected hemp crops across Wisconsin. Hemp is susceptible to plant diseases and insects, and weather worries continue into 2020. Industrial hemp will be insurable in 2020 if it meets requirements of the U.S. Department of Agriculture’s Whole-Farm Revenue Protection Plan. But hemp exceeding the tetrahydrocannabinol level isn’t considered an insurable cause of loss. And to qualify for the crop insurance, a grower must have a production contract with a processor.

Two-thirds of farmers who were growing hemp for cannabidiol didn’t have contacts, Mitchell said.

“And we currently don’t have the proper infrastructure to support a spot market,” he said.

Dawn Thilmany is a professor and Colorado State University-Extension economist in labor and agribusiness management. She also will be speaking at the Wisconsin Agricultural Outlook Forum. Because Colorado was the first state to legalize recreational marijuana it has more infrastructure in place. Colorado growers planted in 2018 about 90,000 acres of hemp. And about 70 million square feet of greenhouse space was devoted to hemp.

Growers nationwide heard in 2019 that one could earn as much as $50,000 per acre for hemp. But those prices were likely due to tight supplies in the emerging market for cannabidiol. As supply increased and quality became more variable, prices waned, Thilmany said.

Growers could expect to invest between $9,000 and $12,000 per acre in production. Many Wisconsin growers financed themselves. Lenders were leery about the lack of infrastructure and institutional knowledge for industrial hemp, Mitchell said.


Growers thinking about producing industrial hemp in 2020 should proceed with caution.

“Be sure you know your market and where you’re going to sell,” Mark said.

But marketing data in most states are still lacking, Thilmany said.

Growers also need to take into account the cost of seeds or clones as well as labor required for weeding, trimming, drying and harvesting. Growers with larger acreages of hemp also need to consider the cost of equipment for trimming buds. Mark said there are currently no chemical controls registered for industrial hemp so growers must rely solely on biological treatments. In Kentucky growers have been forced to contend with crop damage from corn earworms and hemp leaf spot.

A cooperative model might be the best option for growers. The UW-Center for Cooperatives can help growers define business potential, Mitchell said.

The business and marketing of hemp will be discussed at the Wisconsin Agricultural Outlook Forum, which will be held from 10 a.m. to 3 p.m. Jan. 28 at Union South, 1308 W. Dayton St., Madison, Wisconsin.

Lynn Grooms writes about the diversity of agriculture, including the industry’s newest ideas, research and technologies as a staff reporter for Agri-View based in Wisconsin.

Previous How the Canna Hemp brand was born from hope - Leafly 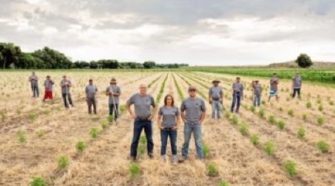