Illegal in the US between 1937 and 2014, hemp missed over seven decades of scientific research that’s benefited other crops. Through trial and error, farmers are still perfecting hemp’s genes, irrigation, and fertilization methods. They’re debating whether to harvest by hand or by combine. Phantom demand, resource shortages, and new regulations make this boom-and-bust market even more unpredictable.

Tuesday, Oct. 29, the USDA released the 2018 Farm Bill’s interim final rule. Farmers worry that the more restrictive laws will create delays and expenses. Previously, certified laboratories tested the actual THC was 0.3% or lower. The new regulations shrink the pre-harvest testing window from 28 days to 15 and require a Drug Enforcement Administration-registered laboratory, of which there are only a handful nationwide, to determine the potential THC by decarbonizing the hemp (applying a low heat for 30-60 minutes to covert cannabis’ non-intoxicating THCA into psychoactive THC). As a result, many genetic variations are no longer acceptable, and farmers will need to start over acclimating their plants to the climate.

Just north of Madras is the 45th parallel, a climate zone that’s grows a high quality of CBD. This combined with a dry climate make Central Oregon optimal for hemp growth, but this year’s weather was unusually difficult. In August, gumball-sized hail pelted approximately 600 hemp acres. Some farmers, such as Jeff Whitaker of Whitaker Farms in Culver, lost 50% of their plants, nothing remaining but sticks poking from the ground. Unexpected late-summer rain trapped mold inside flowers, especially those lying on the ground during harvest. Prineville, for example, is so far approximately 3 inches ahead of its 10-inch annual average precipitation. The spring frost delayed planting and a mild summer slowed growth, so many plants weren’t fully mature when October arrived. Some farmers harvested the plants quickly while others waited until November.

Whether dead on the field or bagged for processing, hemp degrades month-to-month. Phantom demand has also halved the worth of hemp. Farmers who didn’t have a game plan from the beginning are struggling to find buyers. Dustin NcCorchuk, the marketing director at Phase 2 Extraction, says during just the last few weeks he’s received hundreds and hundreds of emails from farmers looking to sell their just-harvested plants.

“It’s a challenging industry because there are a lot of shady people trying to make a quick buck,” warns Phase 2 Extraction president Eyal Goldman. “So-called brokers, people who pass themselves off as experts because they know the word hemp, want commission despite the actual supply and demand.”

These “brokers” convinced farmers that demand was much higher than in reality and flooded the market. As of October 24, Oregon has registered 1,952 growers to plant 63,205 acres this year according to the Oregon Department of Agriculture. Compared to 2018, these numbers represent a 334% increase in growers and a 549% increase in acreage. Crook County and Jefferson County each contain approximately two-dozen registered growers.

After harvest, hemp is sent to a processing facility, such as Phase 2 Extraction, which spent eight months and millions of dollars converting an old wood mill into the first fully licensed extractor in Crook County in 2018. (Freedom CBD followed the same year.)

Phase 2 Extraction buys the majority of their biomass from neighbors within a 50-mile radius and a small amount grown in Molalla. Machines extract 1,600 pounds of biomass during an eight-hour shift. They sell the CBD oil to a variety of companies, including Ablis CBD Infusions, a Bend distillery.

“We’re really specific. We’ve been buying hemp extract for over five years. It’s important to have an extractor who knows what they’re doing — someone who tests and retests the quality and that all the solvents (chemicals) are removed during extraction,” says COO and cofounder Max Bendis.

Using a local extractor allows Bendis to ensure the quality by seeing their product “from farm to bottle.” (An added benefit, both Phase 2 and Ablis are Kosher-certified.)

Goldman isn’t too worried about the same phantom demand happening to extractors, especially with hemp on the verge of going mainstream with brands such as Coca Cola and Anheuser-Busch preparing to eventually roll out CBD products.

To bypass supply chain unpredictability, some businesses, such as Lazarus Naturals, headquartered in Seattle, create their CBD products from seed to bottle. At their four farms, including one in Terrebonne and two in Powell Butte, they’re testing drip versus pivot irrigation, different fertilizers, and other farming methods for quality and affordability.

In contrast, the other 30 acres took a day to harvest by machine.

“Unless you’re using machines, I don’t think it’s going to pencil out,” says Evan Skandalis, VP of Farm Operations at Lazarus Naturals. He concedes that hand-harvested hemp has twice the potency, but it’s too hard to scale and doesn’t affect the final product’s quality.

A project management background brought Skandalis to hemp. He joined Lazarus Naturals six months after it was founded in 2014 when there were only three or four employees and moved to Powell Butte in 2018 to manage the farm operations. The company has grown to 150 employees, 25 here in Central Oregon, and expectations are to expand into additional hemp markets.

Skandalis commiserates with farmers who gambled everything on hemp and lost. “Coming from Seattle, I didn’t know how hard the farming community was hit by low prices and crop failure. I have a newfound respect for people who farm. It’s really hard to make and maintain money doing it, which is why there’s been so much interest in hemp, but it’s a huge challenge.”

Quality local journalism takes time and money, which comes, in part, from paying readers. If you enjoy articles like this one, please consider supporting us. (It costs just a few cents a day.) 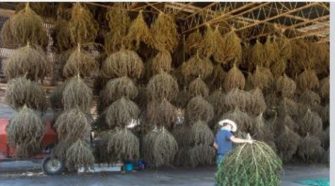