High input costs, unstable genetics and a steep learning curve impacted most new hemp farmers in the first legal farming season after legalization of hemp as a commodity crop.

But small farmers especially are seeing high barriers to entry within the nascent industry, according to farmer advocates.

Steep licensing fees and minimum plant numbers were set to help state programs mitigate the costs of inspections. But they might also preclude some smaller-scale farmers from getting into the hemp business.

This was a concern among farmers in Ohio, where the state charges prospective hemp growers a $500 licensing fee and requires a minimum planting of 1,000 plants grown on at least a quarter acre.

Ohio’s rules were devised after reviewing hemp programs in other states, assessing what worked and what didn’t, said David Miran, executive director of Ohio’s hemp program.

Ohio Hemp Association President Jen Lynch said overall the rules are solid, but the $500 application fee is cost prohibitive for some.

“Is that something that’s going to make or break the industry? Absolutely not,” Lynch said.

“But that was something we had hoped they would give a second look to.”

In Washington state, annual license fees have been notoriously high during the past few years.

For 2020, the state has set growing license fees at $750 from January to June, but that number increases to $1,200 annually on June 1, according to the Washington State Department of Agriculture.

Other states have reduced license fees. In North Dakota, state regulators charged $1,300 until last year, but reduced fees for 2020 to $350.

Small farmers have not often found help from the government, which has set up policies that favor big agriculture, according to Jillian Hishaw, an agricultural law attorney based in Charlotte, North Carolina.

Low commodity prices and trade tariffs contributed to making 2019 one of the most strenuous years in recent history for farmers.

The American Farm Bureau Federation reports that of the $88 billion in farm income expected for 2019, 40% was from federal aid and insurance.
According to the U.S. Department of Agriculture, slightly more than half of farm households have negative farm income each year and rely on off-the-farm income to make ends meet.

Many farmers looked to hemp this year to help save their land. But high input costs, bad weather and unstable genetics that caused crops to fail made for a miserable year.

On top of those difficulties, farmers of all sizes – especially small farmers who are trying to produce hemp as a high-value crop to save their farms – are worried that the USDA’s interim final rule for hemp production, which imposes strict THC testing standards and requires that farmers stay within a threshold of 0.3% total THC, will cause them to lose their hard-earned crops, and all their money and land with it.

“I grew six different varieties with great success – but even our fiber hemp went over 0.3%,” hemp farmer James Kubba wrote in an email to Hemp Industry Daily.

“I hope the USDA listens to us so we don’t lose our farms over this plant. I have lost thousands of dollars that I have no way of paying back at the moment. It is very frustrating and depressing.

Hishaw said many of her clients feel optimistic about hemp, but corruption within the industry and a lack of crop insurance has caused many farmers to lose their farmland.

“Small farmers, particularly aging farmers, are signing contracts with companies … and these companies don’t care that farmers are putting up generational land as collateral,” she said.

How to protect small farmers

To protect their interests and their farmland, Hishaw recommends that small farmers:

Network within industry associations to develop relationships with other small farmers.
Develop buying and selling cooperatives for better economies of scale when purchasing inputs such as seeds and clones and more thorough vetting of brokers and buyers to fetch a decent price for the crop.
Retain an attorney to read over buying contracts – or, if that is cost prohibitive, have trusted family members or friends look at the paperwork.
Use land grant university extension services to ask for help connecting with legal and business services with knowledgeable and honest experts.
Ask for buyers’ incorporation paperwork, a bonded letter and a monetary note that proves they can pay for the crop.
Don’t overcollateralize. For growers that enter into a contract to grow for a specific company and they’re providing finances, don’t put farmland up as collateral. “If all you have is land as collateral,” Hishaw said, “only put up a fourth and grow what you can grow with that fourth – but don’t put up the whole farm and lose it over this one plant because you have been financially strained.”
Don’t show desperation. “That’s when the wrongdoers come out of the closet, because they can smell your desperation,” Hishaw said. “Think of it like being on a date. You’re the one that’s the landowner – they’re not. You’re the one that holds all the cards. Remember your worth.”

“If you know what you’re doing and you do your homework and you get the right varieties, and you have prearranged your processor or you’re going to process it yourself, then I think it can be done,” Fish said.

The Associated Press contributed to this report. 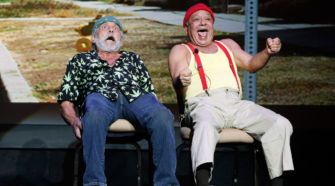 The Unlikely Nostalgia of Cheech and Chong