A proposal to add a hemp oil extraction facility to a current hemp farming operation in Powell Butte has met opposition from multiple nearby neighbors.

Following a public hearing on the matter Dec. 11, and after accepting additional written testimony from opponents of the proposal and the applicant, the Crook County Planning Commission will meet Wednesday to deliberate.

Stanley Shephard, owner of Central Oregon Processing LLC, is seeking a conditional use permit to expand operations in Powell Butte to include extraction of hemp oil. Currently, the company grows and dries hemp at the location, which is on Southwest Cornett Loop.

Hemp is a relatively new agricultural option in Oregon, which was spurred by a 2017 Department of Agriculture decision to participate in a pilot project.

“That allowed people to grow industrial hemp in the state of Oregon as a legal farm crop,” explained Crook County Planning Director Ann Beier. “So that is the backdrop under which we look at hemp. It’s a recognized farm crop just like hay or mint.”

Beier added that when people grow crops, processing the harvested items typically follows, and processing can take many forms. She points out that farmers have operated mint distilleries, which extract the oil from the plant.

County Planner Katie McDonald said that in land use, there are three ways to obtain approval for a processing facility on farmland. Operating a facility that is less than 2,500 square feet can be approved without conditions, and so can a facility up to 10,000 square feet, provided at least 25% of the product processed is grown on-site.

The third option, which is reserved for any facility larger than 10,000 square feet, involves conditional use criteria and is viewed as a commercial use in conjunction with farm use. The proposed facility, which would make use of an old hay shed, is about 17,000 square feet.

“The proposal is to utilize the existing structure and place the initial processing equipment under that structure,” McDonald said.

The county planning department received an application for the extraction facility Oct. 31. As mandated by state statute, the Planning Department gave 20 days’ notice of an upcoming public hearing on the project to all neighbors within 750 feet of the proposed facility and issued a public notice about the hearing in the newspaper.

“They were overwhelmingly in opposition to the proposal,” Beier said.

After fielding considerable testimony, the planning commission chose at the conclusion of the meeting to leave the record open and accept additional written testimony from the public and offer the applicant an opportunity for written rebuttal.

“What the planning commission said is we hear that you have a lot more concerns and would like to submit additional evidence you feel we need to know,” McDonald said.

Several neighbors took advantage of the opportunity as the planning department received multiple, sometimes lengthy, written documents outlining why they are opposed to the project.

Frank and Marta Izo, who live on Cornett Loop, questioned the safety of the hemp oil extraction process.

“Their named process includes the use of a number of extremely dangerous, extremely flammable or explosive chemicals and solvents in large quantities,” they wrote. “An accident from the extreme heat and cooling and pressure have happened before in these projects and are certainly possible again.”

The Izos went on to say that wildfire danger, explosive accident danger, toxic gases dispersed by accident into the air and harm to wildlife, cattle and human beings are all possible.They were not the only ones to express safety concerns. Steve and Bev Oberg, who are also Cornett Loop residents, said the planning commission would “be derelict in their duties if they simply defer safety issues to state and federal agencies.”

“Those regulations are bare minimum starting points which have be adjusted to local circumstances,” they stated.

Written testimony from several people expressed a desire for additional access to the facility to reduce traffic on the rural roads in the area and for a limit on the hours of operations to daylight hours, as opposed to the two 10-hour shifts requested by the applicant.

Neighbors also raised concerns about the impact of the operation on the land. Julie Buer stressed that the property for the proposed extraction facility “already suffered abuse from the previous formaldehyde debacle.”

The incident she referenced involved a company illegally dumping hazardous waste, including formaldehyde on the property. Cleanup efforts that started in 2007 and concluded in 2012 removed thousands of tons of waste from the property.

Beier said that neighbors are afraid that the extraction operation might cause similar harm to the land and impact nearby property and residents in the future.

“It became very clear to us, listening to the testimony, that neighbors have long memories about those kinds of things, and rightly so,” Beier said.

Since the proposed operation meets land use guidelines related to farming operations and cannot be rejected, the goal of the planning commission is to condition the operation to account for the concerns raised by public testimony.

In its staff report for the upcoming planning commission meeting, the planning department asks the commission to consider limiting hours to daylight hours only, limiting trips to and from the processing plant to 15 per day, requiring applicants to post a bond for any biohazard spills or damage to homeowners, their property or the community. In addition, they suggest that no temporary housing for workers be permitted on-site and any future expansions require planning commission reevaluation.

The planning commission will meet Wednesday evening. No additional testimony from the public nor the applicant will be taken, and the commission will deliberate and reach a decision on the matter.

You count on us to stay informed and we depend on you to fund our efforts. Quality local journalism takes time and money. Please support us to protect the future of community journalism. 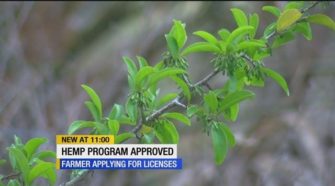