The interactive Baraboo farm will introduce a hemp maze — the first in the state, according to owner Tyler Leatherberry. The maze features 4 acres of organic industrial hemp that attendees can wander through while viewing educational signs about the plant.

Leatherberry said he was inspired to grow the hemp maze as a way to teach people about the differences between hemp and marijuana plants. Hemp plants are bred to be genetically different from marijuana plants. Industrial hemp-oil plants have only small amounts of tetrahydrocannabinol, the active ingredient in marijuana that cause people to become intoxicated.

“I wanted to educate the public on what hemp is about. Everybody thinks that hemp is marijuana,” Leatherberry said. “It’s in the same family. But the (tetrahydrocannabinol) is bred out; people don’t know that. They all think we are growing pot.”

Leatherberry is licensed to grow both industrial hemp and cannabidiol-oil plants. He’s required to keep the tetrahydrocannabinol levels at less than 0.3 percent for it to be certified as usable by the Wisconsin Department of Agriculture, Trade and Consumer Protection.

After the season is finished, Kara Lee Leatherberry said they plan to harvest the maze and send it to a processor. There it will be turned into different biodegradable products.

She said the original response from the public about plans for the hemp maze were somewhat negative, but have improved as people visited the farm and learned about the plant.

“I think 95 percent of the response has been positive,” she said. “Which is really encouraging.”

In addition to the hemp maze, the farm will add two more sunflower mazes to accommodate demand for sunflowers past their peak growing time in August. In past years the farm only featured one maze, which died out by the end of August. The Leatherberrys staggered the planting of the three mazes across 12 acres. They expect to have sunflowers until the first week of October. The farm also features a corn maze, zipline and pumpkin cannon along with a petting zoo and other interactive family-friendly activities.

The fall season started Aug. 10 and is expected to continue until about mid-September. September hours are 3 to 8 p.m. Friday and 10 a.m. to 6 p.m Saturday and Sunday. Group tours are available Tuesday through Thursday. Visit leatherberryacres.com for more information. 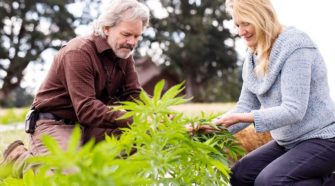