Imagine you’re a race horse. Do you get nervous before the starting bell?

Scientists are curious to learn if CBD might help.

The hype around cannabidiol has hit the equestrian world hard since the 2018 Farm Bill federally legalized industrial hemp and its derivatives, including CBD. While federal officials have yet to finalize rules formally allowing the non-intoxicating cannabinoid in animal feed—or in food products for humans for that matter—CBD supplements have become hot products among horse owners looking to ease pain, reduce pain in muscles and joints and calm signs of stress in their animals.

Now researchers want to know if they actually work. A Texas-based team is currently collecting data on how CBD affects equine physiology. In particular, their new study is examining whether the cannabis compound can help reduce stress, inflammation and obsessive compulsive behaviors in horses.

“I had been interested in the CBD movement for a while, and primarily it is because we’re in a highly horse-populated area,” said Kimberly Guay, a professor at Tarleton State University in Stephenville who specializes in how stress affects animals. “A lot of the horse people I knew were already using CBD, illegally you would say, because it wasn’t legal in Texas at the time.”

Guay’s team is experimenting by giving horses various doses of CBD, generally in the form of oils and edible pellets, and then assessing how they respond. Researchers monitor the animals’ heart rates, inflammation and levels of cortisol, a hormone animals produce under stress. They also observe the horses’ behavior, looking for how CBD affects behavioral indications of pain, stiffness or anxiety.

Guay herself said she has no vested interest in the outcome of the study and doesn’t currently give CBD to her own horse, but she’s eager to see whether the data support what she’s heard from other owners. “The anecdotal evidence is incredibly strong,” Guay told Marijuana Moment in an interview. “And if there is a chance to mediate stress, then I’m all for it.”

The team is aiming to publish the results of the study next year, but Guay said some initial findings could be available as soon as this fall.

“I still can’t say one way or the other, but I know there’s no adverse effects, apparently,” she said, explaining that researchers have given some animals “a significant dose, and there was no obvious adverse reactions from it.”

Across the country, the U.S. Equestrian Federation, which sets the rules for most of the country’s competitive horse events, noted last year that “cannabinoids have gained increased attention and have become nearly mainstream.”

But the rulemaking body said that a horse testing positive for CBD violates competition rules because the cannabinoid is “likely to [affect] the performance of a horse due to its reported anxiolytic effects,” referring to the compound’s apparent role in reducing anxiety.

The U.S. Food and Drug Administration is responsible for regulating the country’s animal feed, and so far CBD has been forbidden. Guay said that if the horse study shows positive results, CBD could also be looked at as a supplement for livestock used for food production.

“If there’s some version of the byproduct of the plant in hemp that could be utilized or incorporated into feed or whatever that could help minimize stress for livestock animals, that would be a huge benefit,” she said.

Currently stress in livestock is managed either with behavioral controls, such as limiting the amount of time animals spend in confined spaces, or through the use of sedative drugs. But sedatives, Guay said, can affect an animal’s balance and its ability to regulate body temperature.

Anecdotally, horse owners who experimented with giving CBD to their animals continued using it “because they believed so strongly in the effects CBD was giving them without the need for sedation,” Guay said.

“That intrigued me,” she added. “We can get the empirical evidence, it’s just going to take time and some effort.”

Most horse owners she’s talked to are on board with the study, Guay said, and are eager to hear the results. But stigma around CBD, even when produced from industrial hemp, remains evident in her home state of Texas, which legalized hemp and CBD production in mid-2019. Federal regulators approved the state’s hemp plan last month.

Guay told Marijuana Moment that she’d been interested in studying the effects of CBD on horses prior to Texas legalizing, but the university system was wary. “I had been chasing this project for a year before it was legal in Texas, and the A&M system would not give me clearance,” she said. “I knew the wave was coming.”

Even today, there are still lingering fears. “People holler at [research assistants] on the phone and voice their opinion,” Guay said, “and some people hang up on them because of that stereotype, that stigma that comes with CBD so far.”

Among the broader veterinary community, that stigma is slowly fading. A survey last year found that most veterinarians consider themselves fairly knowledgeable about recommending cannabinoid therapy for dogs, for example. The problem? Respondents said their state veterinary associations didn’t provide specific guidance on the subject, even in states where cannabis was legal. They also felt research was lacking.

More research is coming, even if it’s not quite keeping up with industry hype. In his annual budget proposal released last week, President Donald Trump directed $500,000 to the FDA’s Animal Drugs and Feeds program in order to “strengthen its capacity to evaluate scientific data related to the safe use of cannabis and cannabis derivatives in animal products.”

Asked if she’d tried CBD herself since Texas legalized the products, Guay at Tarleton State said she had. “Of course I’m going to try it,” she replied. “We’re making our animals ingest it, so I wanted to see what their experience is. They can’t talk.”

She hasn’t noticed many effects so far from cannabis oils, she said, other than “some versions taste terrible.” But after recently using a topical cream, she felt the product may actually have helped. “I have tennis elbow, and I rubbed it on my elbow, and I feel like it significantly helps my elbow. It reduced the pain in my elbow,” she said.

Despite a positive result, Guay knows her evidence is only anecdotal. She knows better than to put stock in what could be a placebo affect.

“I’d have to quantify it,” she said. “I always need numbers.” 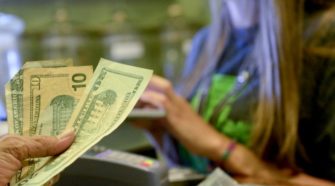