MADISON (WKOW) — As lawmakers are poised to pass a package of bills to aid the struggling agriculture industry, hemp farmers want something to help their industry too.

Members with the Wisconsin Hemp Alliance are asking state lawmakers to consider legislation to expand research and innovation for hemp fiber.

The request comes as the legislature plans to vote on proposals this week to help the agriculture industry by boosting dairy markets, mental health resources and provide tax cuts to farmers. The Assembly plans to vote this week, the Senate could take them up next month.

The new proposal would establish a Wisconsin Hemp Fiber Innovation and Technology Accelerator in the Institute for Sustainable Technology at the University of Stevens Point. It would invest $125,000 for the project with the goal of finding new innovative ways to sell and create fiber products.

Hemp producers, growers, and retailers said their industry needs to expand to fiber after many first time growers struggled to profit.

“We knew we had to grow fiber at the same time because the crop is cheaper to grow it can be grown on more acres and it’s more than one revenue stream,” said Liegel.

According to the Department of Agriculture, Trade and Consumer Protection, out of 860 individuals licenced and actually grew hemp last year, 250 reported they had to destroy their crops. Department officials said some had to destroy entire fields, others just one section, because some plants contained too much THC or other factors such as weather or disease.

Because of those who’ve struggled in this industry, Liegel and others want more opportunities to help other farmers profit from fiber.

“We need local legislators to change the current state of affairs so Wisconsin can prosper and get ahead of the curve in fiber production compared to other states,” said Liegel.

Rob Richard, president of Wisconsin Hemp Alliance said investments in fiber research are necessary to get ahead of other states.

“There’s a saturation of CBD in the market and you’re going to have a lot of hemp farmers across Wisconsin that haven’t yet sold their crop from last year… I think the long term growth and success and sustainability is going to be in fiber,” he said.

After farmers of all commodities experienced a wet growing season, which could occur again, Richard said there’s no better time than now to consider this proposal.

“If Wisconsin keeps getting the wet weather we have our last few years it is going to be very hard for us to grow the grain here because of the humidity and the wetness. One place where we can really excel like we did in the 1930s-40s is fiber.”

Richard said he pitched the idea to lawmakers two weeks ago and understands the tight deadline but remains hopeful it’s considered before lawmakers adjourn for the year.

“I think there’s incredible value in it and a lot of the industry stakeholders are ready to throw money at this but they want the state to buy in as well.” 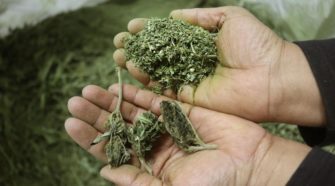