Before it ends, the coronavirus crisis described by the U.S. government as “our Pearl Harbor moment” will likely kill hundreds of thousands of Americans while the nation sinks further into recession, if not a full-blown depression. Small businesses will shutter. Hourly workers will become homeless. Unemployment will continue to soar, exposing a fragile system left in place after decades of globalization.

Stimulus money might help, but what the United States really needs is a self-sustaining, homegrown commodity that would benefit everyone, from the agricultural farmer to the medical patient, as well as all the clerks and customers in between — not to mention the hospitals and clinics experiencing severe shortages of gloves, facemasks, and gowns.

That commodity would be hemp, a powerhouse of a plant that until recently had been criminalized by the federal government because it is a cannabis derivative, although it does not contain enough THC to get a person high. Legalized at the federal level with the 2018 Farm Bill, hemp is expected to become a billion-dollar industry in Florida and has the potential to be a godsend for multigenerational farmers who have suffered economically since the signing of the North American Free Trade Agreement (NAFTA) in the 1990s.

Florida, in fact, is the only state where hemp can be grown year-round. During the summer, farmers can grow industrial hemp for its fiber, and in winter, they can produce CBD-rich hemp.

“The rest of the United States can only produce 70 percent of what we can produce in Florida,” says Glenn Whitworth of Whitworth Farms in Boynton Beach. “We can get four harvests a year when other places are lucky to get two, maybe three.”

“The only thing that is going to keep farmers alive is possibly hemp.”

Whitworth Farms once boasted the freshest tomatoes in the region but went out of business after it was unable to keep up with cheaper imports from Mexico. Today it is back in operation as a hemp farm through a partnership with Green Point Research, a Florida biotech company that sells bulk cannabinoid extracts to other companies for use in their products.

But if history is any indicator, Whitworth says, the American farmer will probably end up getting screwed once the market becomes saturated with cheaper hemp from abroad. After all, Mexico is preparing to become a major player in the future global market after it legalizes marijuana and hemp, which the country planned to do this month before the virus postponed all legislative action.

While the country is on economic lockdown, it might be a good time to rethink the outsourcing of all manufacturing to foreign countries for the sole benefit of shareholders and executives.

“The economy needs to change in a way that’s resilient,” says David Hasenauer, CEO of Green Point Research. “We need to get back to the idea of localization. And that’s where hemp really benefits as a feedstock for all these manufacturing components, whether it’s packaging, 3D printing, or making masks and ventilators.”

Hemp is a superfood, rich in protein, fiber, and healthy fats. It is also rich in nonpsychoactive cannabinoids, including CBD. Hemp can be grown for its industrial fiber, which has served humanity for tens of thousands of years. It can even be turned into toilet paper.

In 1942, less than a year after Japan attacked Pearl Harbor in a raid that sent the United States into World War II, the nation was facing shortages of fiber, so the federal government encouraged farmers in Kentucky and Wisconsin to grow hemp to be used in ropes, parachutes, and uniforms. The government even produced the propaganda film Hemp for Victory, which shows how hemp can be turned into fiber.

It was a hypocritical move. Only five years earlier, the federal government had made marijuana illegal after manipulating the masses into believing weed was the Devil’s lettuce. Immediately after the war, the hemp program was shut down, and the government later tried to deny it existed.

In today’s war against coronavirus, hemp can come in handy in other ways. Klaus Wallace, the owner of Rawganique, a hemp-fiber producer in Washington state, offers a hemp face mask, which sold out at one point last week when governors and mayors throughout the United States began mandating the use of masks to prevent the spread of the virus. Wallace is quick to say his masks are not medical grade or comparable to the N95 masks that have been in high demand.

“The only thing that is going to keep farmers alive is possibly hemp.”

“It was originally designed as a dust mask to use when you are cleaning your workshop or house or bathroom, as well as when you have a cold or flu and you need to go outside. You wear a mask so you don’t infect other people,” says Wallace, who has been in the hemp industry for more than two decades and sells a wide range of hemp clothing, accessories, and bed and bath products. “Turns out the coronavirus is similar to the flu because infection is through droplets, so it stands to reason [a hemp mask] has a certain amount of protection.”

For many people, hemp is medicine that can be purchased over-the-counter at certain retail shops, including the Hemp Pantry in Inverness, which sells products such as hemp flower and CBD honey. But those retailers were left seeking clarification after Florida Gov. Ron DeSantis ordered all nonessential businesses closed.

DeSantis’ list of essential services is broad and includes gun shops, hardware stores, and car dealerships. But it makes no mention of hemp retailers, which is why Carlos Lopez-Cantera, president of the Hemp Industries Association of Florida, wrote an op-ed for the Sun Sentinel earlier this month calling for the U.S. Department of Homeland Security to designate the industry as “critical infrastructure,” which would allow it to remain in operation during emergencies.

Medical marijuana dispensaries, which sell CBD products along with the psychoactive THC products, have been allowed to remain open as essential businesses, and sales have been skyrocketing as patients stockpile cannabis for the long haul. However, only medical marijuana patients registered with the state are allowed to purchase products from dispensaries. No such permit is needed to buy products from the hemp retailers because their products contain only traces of THC.

“The healing properties are in all the cannabinoids, not just THC,” says Rebekah Potter, operating manager of Hemp Pantry. “Not everybody wants to get high. I have people who don’t react well to THC. What’s going to happen in the next 30 days when they can’t get what they need to be able to function every day?”

Unsure of how to proceed, Potter says, she is accepting orders only online and by phone.

Hasenauer, the CEO of Green Point Research, hopes the federal government will recognize hemp as an essential commodity as it did during World War II.

“It’s the same concept, except we are fighting the virus instead of the Nazis,” he says. “There will be more viruses and more issues that we have to deal with as a human race, and we need as many alternative therapies as possible. And we need localized manufacturing of all those things.”

Carlos Miller is a Miami multimedia journalist who runs Photography Is Not a Crime, an award-winning national news site about First Amendment issues and police abuse.

Next Smoking CBD: Smoking Hemp Flower With Nick Warrender Of Lifted Made - Ministry of Hemp 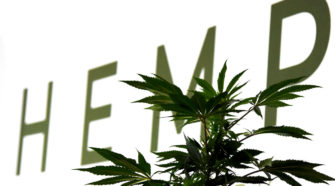