Fresno State played a large role at the World AG Expo in Tulare last week, delivering demonstrations topics. However, there seemed to be one very popular this year.  The hemp pavilion, which was in its first year, was bursting at the seams.

The hemp and hemp seed growing for cannabidiol (CBD) oil was really a highlight of the expo.  Several buildings were dedicated to hemp this year.

Companies such as HiLo seeds which had a big hand in advocating for and bringing hemp to Expo, was proud to show off their seeds and technologies.

Although it was the company’s second year bringing its hemp to the show, it was the first that was in such a grand space.  The company also hosted a taco truck and had one of the larger displays at the Expo. Closely second in the Expo’s firsts was the abundance of women in the industry who were highlighted.

There were several presentations from the Women in Ag Networking Group, as well as the World Ag Women Pavillion that housed all the demos for cooking, canning, gardening, goat raising and so forth.

“There was a big draw to these presentations from women in AG, making them hard to even get into unless you snagged your seat early,” said,  Beth Dolen. “These are the talks we are really needing to hear right now. It’s uplifting to know that we as women have more support than we think in the male dominated industry, I can’t wait to share a lot I learned with other women I know in AG.”

Meanwhile, Fresno State University’s viticulture and enology exhibits have been very popular the last few years. But they were supported far better this year with several wineries pouring samples as well as making presentations, often headed up by Fresno State alumni Luca Brillante and Kristy Sun.

Cardella, a winery located in Mendota was founded by Fresno State alumnae’s in the 70s and its head wine makers are Fresno State grads.

Another hit seemed to be the tri tip provided by the Goshen Mounted Police Group. The group starting in 1946 has been barbecuing for a cause for years.

Third generation barbecuer Don Atahschled said, “They have all loved coming out to the expo the last 51 years to support AG, and also the proceeds earned all go back to the community.”

Sales representative Jen Lamboy said, “HiLo were able to bring more info and have a greater presence this year now that it has been opened up to all hemp on a greater level. The company is really about cultivating growth for farmers and the hemp industry.” 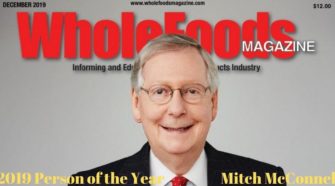