For thousands of years, people in China have been growing the Cannabis sativa plant for its fibers, which are a good material for textiles, and its seeds are a source of highly nutritious food and oil, according to Yang Ming, a scientist with the Yunnan Academy of Agricultural Sciences, who is the country’s leading authority on hemp.

In the 1980s, the reform and opening-up policy saw Yunnan attract a large number of backpackers and adventurers. They came mainly for the fantastic natural scenery and the cultures of various ethnic groups, he said.

“Occasionally, they found cannabis in the wild and took some leaves and flowers surreptitiously at night to smoke. Marijuana, which was described as a ‘secret treasure’ by the travelers, has psychotropic qualities that were barely known to the local people,” he added.

Rather, Cannabis sativa is an ordinary plant cultivated by ethnic groups for its fibers. Fabrics made from hemp, its industrial strain, have many good qualities: They are anti-static, antibacterial and remain comfortable to wear despite temperature changes. In addition, they provide good protection from ultraviolet rays and dry quickly.

In 1989, the academy established the country’s first center for the study of the plant.

The local government quickly noted the growing illicit use of cannabis by foreign visitors.

To halt the trend, it promoted the cultivation of flax. The initiative failed, though, because hemp fibers are less permeable than flax fibers and also attract less dust.

To solve the problem, the provincial agriculture department introduced industrial hemp as a replacement plant.

In hemp, the level of tetrahydrocannabinol, or THC, the mind-altering compound found in marijuana, is less than 0.3 percent.

Hemp is an economic crop with no special need for quality farmland. Moreover, its short growing cycle of five to six months provides farmers with opportunities to grow other plants during the rest of the year, according to Yang.

As an easy-to-grow plant, hemp just needs sufficient water during the germination period. However, the optimal time for harvest is short and male plants should be reaped first, because female flowers reach their peak concentration of cannabidiol, or CBD, at the same time, but the amount falls sharply once they have been pollinated.

“It is difficult to identify the gender of hemp seeds before they are planted, so the harvest is very challenging – farmers have to select male plants very carefully without harming the females’ buds,” Yang said. “Soon, we will try to clone female seeds to solve the problem.”

He said hemp seeds grown in different regions of China have adapted to local conditions, such as temperature and the average length of the day – the former dictates when the flowers will bloom, while the latter plays a key role in regulating plant heights.

Hemp plants worldwide grow to an average height of 3 to 4 meters.

“In recent years, we’ve been working on breeding new seeds that will produce shorter plants. That will increase the number in each area and will also fit with the modern agricultural system,” Yang said.

His team has been breeding its own hemp varieties, each of which has to be tested by local police to ensure the plant contains less than 0.3 percent of THC.

So far, they have bred 10 strains, with the eighth variety producing plants that contain 1.3 percent of CBD, the highest among all varieties nationwide. However, Yang noted that it will be overtaken by a seed that will come to market soon, whose adult plant has a CBD content of 5 percent.

“We’ve received countless messages from overseas research teams and companies seeking cooperation and technical assistance for seed breeding and CBD extraction. After all, we are the best in the industry,” he said.

(All photos via VCG)

(If you want to contribute and have specific expertise, please contact us at nature@cgtn.com) 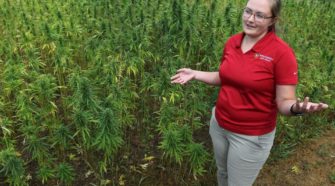