New Mexico’s first hemp growing season looked a bit like the chaos of a gold rush.

The state issued 445 licenses to grow the plant in 2019, after hemp growing was legalized early in the year through the US Farm Bill, but some New Mexico farmers faced a steep learning curve with the crop.

Alex Howell, owner of The Cannabis Supply Store in Santa Fe, tells SFR he spotted a number of problems. One, he says, is the hype of the industry and the trendy production of CBD, which has led to suspicious characters trying to sell seeds, advice or equipment without actually having the knowledge to back up their claims. Another, he notes, is that many new farmers with little growing experience have also jumped into the sector and don’t really know what they’re doing.

“There were farms that didn’t realize just a small change in the elements or a change in watering can change your THC content just enough that you’ll lose half your crop,” Howell says. “2019 was a really exciting year for farmers, they were really ready to go for hemp. But a lot of people didn’t know how, and some got cheated with seeds that weren’t great or exaggerated claims.”

Howell and his online store are sponsoring a new one-day class event for local hemp farmers on Feb. 1 at the Violet Crown Cinema. It will be led by Tom Lauerman, also known as Farmer Tom, a well-known cannabis activist and hemp grower in the Pacific Northwest and California with more than 25 years of experience. Howell says he hopes to turn the event, which he’s calling HEMP NM, into an annual meeting to help New Mexico’s hemp industry.

While some crops did fail for a variety of reasons, overall, the state Department of Agriculture reports New Mexico farmers only had a relatively small amount exceed the 0.3 percent THC limit in 2019, which is the threshold at which crops must be destroyed. In total, the state destroyed 3,927 plants and 52.47 acres, said Kristie Garcia, a department spokeswoman.

“THC failures were not significant,” Garcia tells SFR. “From over 400 licenses, we issued destruction notices for just 34 samples.”

The department does not track the total amount of hemp harvested in the state, Garcia says. But the annual and continuous licenses, which cost between $650 and $750 with additional fees, are distributed all over the state, including large clusters around Santa Fe, Farmington, Hatch and several spots in Northern New Mexico along I-25.

“People were buying overpriced products that weren’t great,” Howell says. “Some people also hired advisors or ‘master growers groups’ and got the run around. Anybody out there claiming to be a master grower—they’re probably not. Master growers tend to not advertise.”

Lauerman says any new market can be like that. The gold rush to the cannabis industry in Washington and Oregon, which launched before the hemp industry, also saw similar bad actors come out of the woodwork, he says

“It’s an exciting market, but it’s a tough market out there,” says Lauerman, who grew successful hemp crops in Oregon and Washington in 2019. “The only thing that’s really trickling down right now is bad business practices of lying, cheating and stealing. You really have to do your due diligence, see who you’re working with and talk to others who have been successful.”

There are tricks to growing hemp in the generally high desert environments of New Mexico— which tend to have shorter seasons than some other parts of the country. Watching the timeline of first and last frost can be especially critical, he says.

“It can get cold regularly in the spring and early fall, and those are things you have to prepare for,” Lauerman says. “Every region is a little different. Also in the summer, if it gets really, really hot, shade cloth is your friend. We’ll discuss all of that, how to buy seeds, how to dry, building partnerships, how to sell your products, planting, weeding, looking for mites. It’s going to be a big crash course.”

Despite the problems farmers face, there is a lot of market potential for the products, Lauerman adds.

CBD, a cannabinoid found in hemp, is already a health trend across the United States. And CBG, a cannabinoid that can be transformed in a lab into any other cannabinoid – sort of like a stem cell – is another one that is likely to take off in the near future, Lauerman said.

“CBG is a big deal right now, and if you look at breeders, you can find some high CBD/CBG strains to plant,” Lauerman said. “CBD is pretty much everywhere these days and it’s a strong market. But CBG will be the next big thing.”

But other aspects of hemp have been overblown or the technology is simply not ready, he added.

“We hear stuff about making gasoline out of hemp seed – but if you really do the research it’s just not viable yet, because we don’t have the processing,” Lauerman said. “It’s important when doing this to understand which markets are viable and realistic.” 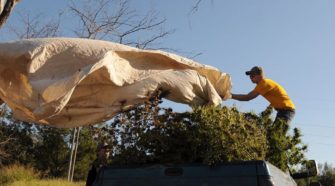