For the first time, the annual Ranch and Farm Expo changed its name to the Ranch, Farm & Hemp Expo, highlighting the growing interest in industrial hemp production in Texas.

Industrial hemp growing was OK’d under the Farm Bill in 2018, but it has been a tough row to hoe to get the process started.

Dan Hunter, the assistant commissioner for water and rural affairs for the Texas Department of Agriculture, spoke at the Expo held in the Multi-Purpose Events Center J.S. Bridwell building Wednesday, and he explained the pros and cons of hemp production in Texas.

Hemp has more than 2,500 uses, Hunter said, and production of the plant could be a great opportunity for Texas in both production of hemp and the processing of hemp into products like fiber or oil.

There are a variety of species of hemp so one of the first steps is figuring out what varieties grow best in each part of Texas.

Hunter said under the law currently, hemp test crops can only be grown under the direction of certain research universities such as A&M, Prairie View and Texas Tech.

The Farm Bill that legalized industrial hemp was passed by Congress in December 2018, and at the time, Hunter said, there was a great deal of urgency from potential producers.

Producing hemp could be a great for the state, but Hunter said producers need to do their homework first.

A challenge, he said, is that there is not much infrastructure in place to handle the testing and processing of hemp.

Licensing and permits for potential hemp farmers from the Texas Department of Agriculture are set to begin later this month.

A hemp-producer license is expected to be $100 and a permit is $75 per field.

Hunter said the department does not yet know what the demand will be for licenses and permits, but he expects several thousands of people will apply during this initial roll out of hemp-growing licenses.

Other states, such as Florida, Hunter said, have received state funding for hemp-production programs but the state of Texas is not offering up any legislative dollars at this point.

Once approved to grow, hemp farmers can dive right into the process, however, there are still a great deal of unknowns about hemp production, Hunter cautions.

Once a hemp farmer is 15 days out from harvest, they have to inform the TDA so the crop can be sampled and tested.

There must be at least one sample per acre of hemp that is collected in a specific way by professionals and then tested using certified equipment.

Once samples are collected, the producer can harvest the hemp, but they cannot release the plants for further processing until the lab tests come back.

If a sample of the crop turns up “hot,” meaning it tests at higher than 0.3 percent tetrahydrocannabinol (THC), the grower must destroy the crop.

If a hemp grower has samples that test “hot” three times, they will be banned from growing hemp for five years.

Other states are producing industrial hemp, such as Kentucky and Tennessee, but crop yields can vary greatly, and hemp seed is expensive.

Hunter said for example that in Kentucky, the largest hemp producer planted 10,000 acres but was only able to harvest about 40 percent of the crop. This translated to an approximately $4-million investment with less than $2-million yield.

Another hurdle is hemp must be dried after harvest and there is a danger of mold or other damage during the drying process.

The variety of hemp, sex of the seed and potential germination rates can be better determined with certified seed.

Male and female hemp seeds grow differently and are used for differing industrial products. Male hemp grows up to 25 feet tall and is better suited for making fiber or rope. Female hemp, Hunter said, grows like a bush and is more often used for cannabidiol (CBD) oil that has become popular for over-the-counter medicinal use.

Hunter believes there will continue to be a market for CBD oil, but thinks industrial hemp for fiber could overtake the industry in Texas.

Hemp fiber will never replace cotton, he said, because the two have different qualities.

Once all the wrinkles are ironed out, Hunter said,Texas has the potential to be a year-round producer of hemp. Along with growing the crop, he said other states could transport their hemp to Texas to be transformed into numerous products.

“Texas has potential to be one of the leaders in this (hemp production) because we are a business-friendly state. I can see business facilities opening up here and crops coming in from other states. Louisiana, Arkansas – I actually see that potential, we just don’t have that infrastructure right now. Because we are business friendly, I can see our processing abilities attractive to other growers from other states to bring it in and have it processed,” Hunter said.

The Ranch, Farm & Hemp Expo, will continue Thursday and includes booths showcasing farm-and-ranch products and services in the Ag Center and demonstrations in the rodeo grounds. The expo at the Ag Center and will include another question-and-answer session Thursday about industrial hemp.

Claire Kowalick, a senior journalist for the Times Record News, covers local government, military and MSU Texas. If you have a news tip, contact Claire at ckowalick@gannett.com. 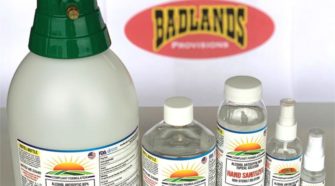