ELKHART — After a nearly 50-year hiatus, crops of hemp are ready for harvest in Elkhart County, but the jury’s still out on how successful Indiana’s newest crop will be for farmers.

“We’ve had a lot of issues, and a lot of things that were out of our control, but we learned a lot,” said Aaron Rink, a farmer in Millersburg.

Rink grew nearly 75,000 hemp plants this year, experimenting with not only growing the crop but best practices for weeding, irrigation and general care.

In several fields, Rink’s crew attempted to use irrigation tape to keep the ground moist but discovered manufacturer defects in the product.

“It caused us to get behind, so the hemp got choked out by the weeds,” Rink said.

Over 50 percent of the hemp plants in those fields were killed due to the weeds or irrigation issues. Luckily, other fields in their care weren’t using that same product so the plants grew tall enough before the weeds could flourish.

That’s another concern for new hemp farmers. The U.S. Department of Agriculture has yet to determine an herbicide for the hemp product so farmers are on their own, weeding by hand or trying to avoid it altogether.

In addition to the already difficult and foreign nature of hemp production for Indiana’s farmers, an unusually wet spring delayed planting, and contributed to the growth of those pesky weeds.

Hartman’s crop north of Goshen was planted nearly a month behind schedule.

“The climate crisis means that farming is more and more unpredictable and riskier every season,” he said.

Hartman hopes to produce CBD to supply local health food stores such as Maple City Market. He farmed less than one acre of hemp for the trial year alongside his organic vegetables.

Overall, farmers are pleased with the first year of hemp growth in the state. It’s the first time the product has been legally grown since 1970. A state license is required.

The Office of the Indiana State Chemist recommends that farmers interested in growing hemp for the 2020 season begin making preparations soon.

“We’ve seen a lot of good fields,” Rink said. “What we’ve found now is that (farmers) don’t have a harvest plan.”

The process making the hemp plant into a usable product is a long and complex one. Following the harvest, plants must be dried out, in a process similar to that of the tobacco plant. Then plants are taken to processing plants for extraction, or for other purposes such as fiber production. The popular medical product cannabidiol or CBD can then be distributed.

Hemp plants are a derivative of the cannabis, which is divided most notably into the marijuana plant, boasting its psychoactive properties, and the hemp plant, for it’s fiber and medicinal properties. Hemp plants differ from marijuana plants in several ways, and one those ways is the potency of CBD.

Farmers interested in growing hemp must become educated on ways to keep the THC content, the psychoactive chemical, low, and the CBD high. By state law, THC levels must be below 0.03 percent. Marijuana and high levels of THC remain illegal in the state, and it is the farmer’s job to ensure their product doesn’t surpass the regulations.

Farmers must regulate temperature, pollen and even the gender of the plants in order to keep their crop within regulation standards.

“If you happen to have a rogue male (plant) you can lose or ruin your CBD content,” he said.

But it gets more complex.

“Sometimes, under stress, the plant can become a hermaphrodite, or turn into a male.”

Pollen from male hemp plants can travel up to 15 miles, so if one farmer mistakenly grows a male hemp plant, other nearby farmers can suffer the consequences.

Since it’s only the first year of growth, agricultural knowledge, and growers to experiment with it, are sparse, but Rink worries that as the crop becomes more popular, the risk of damage to plants by way of fertilization may increase.

“As hemp becomes more popular, it will become a problem,” he said. “We need to, as growers, come together and figure out who is growing what so we can all communicate and we don’t have one farmer whose hemp is going to pollinate another farmer’s hemp.”

Previous Hope and headaches for hemp in NM - Albuquerque Journal

Next Hemp growth, CBD on the rise in Williamson County - Community Impact Newspaper 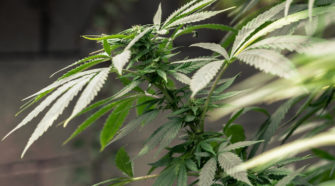