Hemp grower Bill Horton says cannabidiol, the main ingredient in the oils, soaps and salves he produces, and plants containing tetrahydrocannabinol (THC), the psychoactive ingredient in marijuana, are like two dogs of different breeds. “It’s all cannabis,” he said, “but it’s a different strain of the same base plant.

“There is a big difference between the two,” he said.

This is Horton’s second year growing hemp on less than an acre with 100 female plants. One unanticipated surprise, he said, is the number of Monarch butterflies that come to his hemp plants, attracted by the scent.

“It’s an amazing thing when you go out there in the morning and you see all these butterflies,” he said.

The hemp industry reversed course last year with the passage of the federal Farm Bill that reclassified hemp, making it legal to grow. Prior to that, hemp production had been unrealistically taxed since 1937, with the passing of the Marijuana Tax Act, which effectively banned the possession, sale and transportation of the plant.

An article published in August on the Saturday Evening Post website on the 1937 legislation said, “The law taxed marijuana at around $1 per ounce, or $17.95 today. The price, in addition to the forced self-reporting of anyone with a connection to the drug, discouraged its sale and use. The law was enacted on August 2, 1937, marking the day when unstamped cannabis became illegal in the United States.”

The current federal regulation specifies that, to be classified as industrial hemp, it must contain less than 0.3% THC when tested, and according to Horton, the state visits every hemp producer and tests a random sampling of each crop.

“It doesn’t cost the taxpayer a dime,” he said. “It’s self-financing.” The license and application fees cover the costs of transportation and lab fees, he said.

According to the Department of Agriculture, Conservation and Forestry, to grow hemp in Maine, one must pay a $100 application fee, a $500 license fee and a $50-an-acre fee.

Federal law also states a hemp crop testing higher than 0.3%, must be destroyed.

“People equate hemp as a plant that gets you high,” Horton said. “For decades, people have been told not only that it is not good for you, but also that it will kill you and put you in jail.

“We haven’t quite separated or made a distinction culturally between pot, drug cartels and THC, and the whole other side of this plant which is CBD and its derivatives.”

According to an August article on Harvard Medical School’s website, CBD has been effective in treating some childhood epilepsy syndromes. It is also used to address anxiety and insomnia, and to treat different types of chronic pain.

“I would agree that more testing should be done, but the anecdotal evidence is out there,” Horton said. “People have been relieved from arthritis, using CBD products.”

Right now, he said, the market for CBD products is uncertain, with no guarantees for growers.

“You may have all kinds of product available, but unless you have certain connections with certain people, it is difficult to move it,” he said. “There are many people right now growing hemp, but not everybody is connected with everybody else.”

Horton said he was turned away from advertising in Uncle Henry’s and Craigslist. But with all the uncertainty of the market, he managed to “get rid of (his) crop and make a little money.”

“It is the first time ever I made money farming,” he said. “Basically you are on your own, like in any farming enterprise. Moving it, finding someone to handle it, finding someone that’s got the money that’s willing to pay for it, that doesn’t pay so little that it’s not even worth growing.”

Part of the problem, Horton said, is federal regulations have not been clarified. One gray area is the legality of using the U.S. Postal Service to ship product out.

“I deal with a processor-chemist in Maine and I can’t ship him a sample because the mail is a federal entity,” Horton said. “That is the same situation with the banks.”

Horton uses Sensible of Bridgton for processing and uses one of 11 drop boxes throughout the state to get his hemp to the firm.

“The Feds just said, ‘OK it’s legal now and we’re not going to arrest people,’” he said. “We haven’t talked to the post office yet, or the banking industry. On the other hand, the stock market is going crazy with this stuff. There is tons of money out there, but this also attracts a lot of unscrupulous business people. Everyone wants to make a buck.”

Jim Britt, communications director with DACF, said there are 181 license agreements with more than 2,000 acres of planted hemp, and hemp is grown in all 16 counties as of 2019.

A recently issued “Interim Final Rule” statement from the U.S. Department of Agriculture does not clarify enough, according to Britt.

“Maybe after we have a USDA-approved program, the banking and insurance situation will stabilize, but growing hemp will still be very risky and coverage may still be hard to get, as well as loans,” he said.

He also said shipping hemp should not be a problem, but noted, “It is impossible to know if it is hemp or marijuana without a certificate of analysis from the state where the grower was licensed.”

Horton said there is a solid group of hemp farmers who love to grow this crop. “The money is important, but it is secondary to the fact that you are creating your own medicine, or your own fiber, or the ability to create your own salve to ease painful joints.

“There is a certain amount of freedom and libertarianism in the fact that you can grow your own food and you can help with what your body needs,” he said.

In a 2018 grower survey from the state horticultural program, it showed CBD extraction accounted 80% of planned markets. This was followed by bud or leaf oil at 56%, seed 40%, turpentine extraction 20%, fiber 12%, seed oil 8% and grain 4%.

The government is being prodded to make changes, he said. In October, DACF sent a letter to U.S. Secretary of Agriculture Sonny Perdue, asking him to “Please clarify.”

“Given the growth and rate at which hemp production has accelerated in Maine and across the country, and the continued confusion around federal laws, we urge you to work swiftly with the Office of Management and Budget to finalize USDA’s guidance for state implementation plans,” wrote Gov. Janet Mills and Agriculture, Conservation and Forestry Commissioner Amanda Beal. “We believe this Federal guidance will not only help provide long-needed clarification to the states but will be valuable to the broader lending and insurance industries.”

“The pressure is on,” Horton said, “but the market is already going on without it, and if they don’t clarify, the product will move to the black market.”

Horton cited recent examples of hemp farming in the news. In September, a hemp grower in Machias had approximately 1,000 plants stolen. “My heart goes out to that,” he said.

“This stuff looks a lot like marijuana, and that is one of the speculations about the theft in Machias. Someone was going to dry it and put it on the market and sell it as pot,” he said.

A hemp farming couple in Whitefield had their bank accounts frozen and their insurance cancelled, he said, even though hemp is not marijuana, cannot get you high and is legal under state and federal law.

Horton equates hemp farming to a 19th-century trapper in the “Wild West” who has spent all year collecting pelts and finally comes into town to do business. “He doesn’t know where the market is or who’s got money or if it’s going to get stolen,” he said. “There is very little road map to all this. But it’s exciting, fun, and it’s legal.”

The family hemp operation is truly a labor of love for Horton.

“There is three generations, I have grandchildren that come run around in the fields,” he said. “They play hide and seek in the plants.”

Horton goes from seed to harvest, to curing the flower, and then making his own salve, oil and soap. The farm has a display at the Green Store at 71 Main St. in Belfast and also sells directly to people who contact them.

“It’s a closed circle, right here in Waldo County,” he said. “It never leaves the state.”

Previously Horton owned a construction company, but he has always enjoyed farming and said, “It’s nice to have your family involved.

“My son, my daughter, a couple of my grandkids and my partner, Susan, are all involved in this effort,” he said. “We are reconnecting with the soil again, which is the big piece for me.”

For more information on Horton’s products, call 978-764-5724 or email bnarottama@gmail.com. 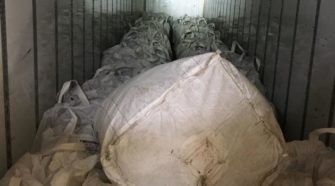