A company that operates a hemp farm plans to add an indoor growing operation at a redeveloped building in Milwaukee’s Riverwest neighborhood.

Wisconsin Growing has applied for a city permit to remodel space on the building’s ground floor.

Santana told the Journal Sentinel Thursday he hopes to begin the indoor growing operation as soon as possible.

He wants to use the indoor growing operation to test the use of various nutrients, as well as genetic techniques, to grow better plants.

Then, Wisconsin Growing would apply those lessons to its 30-acre farm near Whitewater, Santana said.

The company plans to grow about 30,000 plants this spring and summer on its farm, he said.

“Something we learned last year,” Santana said. “You have one shot a year to get it right.”

The 2019 season marked Wisconsin Growing’s first crop. It totaled around 15,000 plants, he said.

Wisconsin Growing also managed a farm with around 125,000 plants for another owner, Santana said.

“It gave us a lot of experience,” he said.

This is not marijuana

Hemp is a business that is gaining momentum in Wisconsin and other states.

Hemp and marijuana are both genetically from the same plant: cannabis.

Marijuana is illegal under the federal Controlled Substances Act — even though Illinois and other states have decriminalized it.

Hemp is not a controlled substance — as long as it contains less than 0.3% of THC, the psychoactive compound in marijuana that produces a high when marijuana is smoked or ingested. Marijuana has a very high percentage of THC.

Hemp is used to produce cigarettes and other substances with cannabidiol, also known as CBD.

The U.S. Food and Drug Administration has not made a definitive ruling on the safety of CBD products.

One challenge with growing hemp is to make sure the crop doesn’t exceed that 0.3% threshold, Santana said.

If that happens, hemp growers could have their crops seized and destroyed by law enforcement, said Trista Curzydlo, an attorney and consultant who spoke at a Monday seminar sponsored by the Commercial Association of Realtors-Wisconsin.

Curzydlo’s seminar, “Up In Smoke,” focused on the benefits and risks from the hemp and marijuana industries for commercial building owners and managers.

That came after then-Gov. Scott Walker in 2017 approved a law allowing farmers to grow hemp in Wisconsin for the first time in nearly 50 years.

Meanwhile, Wisconsin Growing is among the latest in a series of businesses moving into the three-story, 52,300-square-foot Fratney Street building, which was remodeled last year by its new owners.

Our subscribers make this reporting possible. Please consider supporting local journalism by subscribing to the Journal Sentinel at jsonline.com/deal. 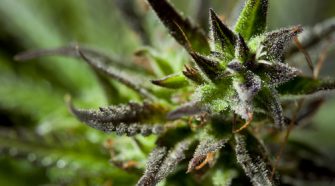 Clearing the Smoke: The Science-backed Health Benefits of Cannabis