A company that specializes in making cannabidiol oil, a non-intoxicating hemp plant extract, and industrial hemp has bought the old Stinger building in Libby.

Isotex Health closed on the deal to buy the building Friday, Sept. 27, according to Lincoln County Commissioner Jerry Bennett.

Isotex is holding a job fair hiring event at the Libby Job Service from noon to 5 p.m. today.

Its a big positive for Libby, Bennett said. We think its great, getting people back to work.

Bennett said the company was initially planning on hiring 20 people to work at the new facility. He wasnt sure how many jobs would be at the new plant in the future, but more people are expected to be hired.

Bennett said CBD oil would be produced at the plant. A biomass product, the leftovers, can be sold and used to make clothing, straws, and many other items.

CBD has been touted for its health, pain-relief, anti-seizure and anti-stress related benefits.

Two representatives from Isotex – Carson Byers and Eugene Elfrank – met with county officials at the Port Authority meeting May 20.

At that meeting, they said they will also be fitting the building out and getting it ready for product.

They are excited about outfitting the building, and it probably will be one of the biggest plants in the country while much of the equipment will be very cutting edge.

The residual product can be made into various other things such as a concrete type material, pellets for pellet stove, and hemp fiber boards.

Byers said the community has been very helpful and they are just working on the fine details. He also said they plan on installing a grain silo or something similar so when it is unloaded from the train it could then be conveyed into the factory.

The company is growing its hemp in Eastern Montana where there is more access to land.

Commissioner Peck asked if they could grow it in the county, but Byers said they would have to have a lot of acreage. He said that 100 acres would only supply about five minutes of raw product to their machines.

Byers said Isotex plans on having meetings with the public to educate them on CBD and the company.

Some have confused hemp with marijuana and CBD with tetrahydrocannabinol (THC), the active ingredient in marijuana, but hHemp contains no more than 0.3 percent THC.

CBD and hemp plants have been popping in Montana since the Hemp Farming Act was attached to the 2018 Farm Bill.

Before, hemp and marijuana were considered the same plant and both considered Schedule 1 drugs along with heroin, LSD and methamphetamine.

Industrial hemp is authorized as an alternative agricultural crop by the Montana Legislature. 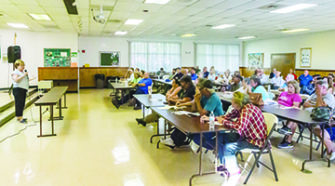