“People think this is new,” said Strohfus, as he sifted hemp seed through his fingers at his Afton farm. “But the only thing new is that farmers can grow it now.”

Farmers like Strohfus are tiptoeing into the hemp market, planting fields in Woodbury, Afton, Dakota County and across the state. State officials are encouraging them, saying that hemp would stimulate the state’s economy.

Yet the growers are shackled by the fact that hemp – unlike any other crop – has a lingering reputation as a source of dangerous drugs. The plant is related to marijuana, which is listed in the same category as heroin and LSD by federal officials.

Farmers have been able to grow hemp in Minnesota for only three years, and only with restrictions. As the rules change, farmers and consumers are in a kind of limbo, waiting for lawmakers to decide what is legal and what is not.

“Hemp has potential, but it’s in a very weird area,” Andrea Vaubel, deputy commissioner of the state Department of Agriculture.

But the liberation of hemp might be coming soon. Hemp would be removed from the federal list of illegal drugs by one version of the upcoming 2018 federal Farm Bill. If that language is passed, consumers would see hemp in products from clothing to cookies to cosmetics.

Because Minnesota’s climate is perfectly suited for growing hemp, the once-illegal plant would join corn and soybeans as leading crops in Minnesota.

“It would be a game-changer for Minnesota farmers,” said Paul Frank, who grows hemp in Dakota County. “It would be huge.”

Hemp and marijuana both contain the intoxicating chemical THC – which is why they have been linked together since the 1930s as dangerous drugs.

“We have spent the last 90 years unlinking them,” said hemp grower Frank.

Hemp is grown for the long, silky strands used in clothing – such as the original Levi’s jeans. The seeds are nutritious, too.

The U.S. government has flip-flopped on hemp before. During World War II, when hemp was illegal, the government nevertheless produced the movie “Hemp for Victory” to encourage farmers to grow hemp for the war effort.

But after the war, hemp reverted to its status as a criminalized cousin of marijuana.

The first step toward rehabilitation was with the 2014 Farm Bill, which authorized states to approve the cultivation of hemp. One year later, Minnesota did.

Afton hemp grower Strohfus was among the first seven farmers to apply in Minnesota, and one of 41 farmers today who cultivate hemp on 710 acres around the state.

But hemp is still treated suspiciously.

Hemp farmers must submit to background checks. By law, they must agree not to raise hemp to make money, and hemp must be raised for research purposes as part of a pilot program.

Most confusing of all, a key product from hemp is probably illegal to sell.

CBD, or cannabidiol, is a non-intoxicating compound found in marijuana and hemp. It is sold online and in retail stores.

CBD is usually marketed with a list of health claims, none of which have been approved by the FDA. And selling CBD is still – probably – illegal. So CBD products put police in an awkward position.

“The Drug Enforcement Agency’s position is very clear. CBD is illegal,” said professor Weiblen. “But hemp advocates do not accept that. It’s a very gray area at this point.”

Without regulation, there is no way to know if a product contains the right amount of CBD, or any at all. When CBD is packaged to resemble medicine, Wiberg starts to worry.

“Then they say to take one of these a day to help anxiety. That is where the problem comes in,” he said.

In his shed, Strohfus runs his fingers through the seeds that are just beginning to take root in American consumer products. He points to the hemp seeds now sold as food in popular stores.

And if hemp becomes legit, Strohfus said the gold rush will begin.

Coca-Cola is even examining the market potential of soft drinks with CBD, according to a report in Bloomberg News.

“I could see where General Mills would say they want 40,000 pounds a week,” he said.

As he leaned on a bale of hemp stalks in his shed, he gazed at it warmly.

Previous After Sweetening the Deal, Namaste Technologies Raises C$51.8 Million in Sale of Stock and Warrants 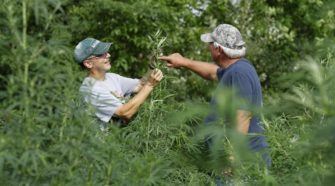